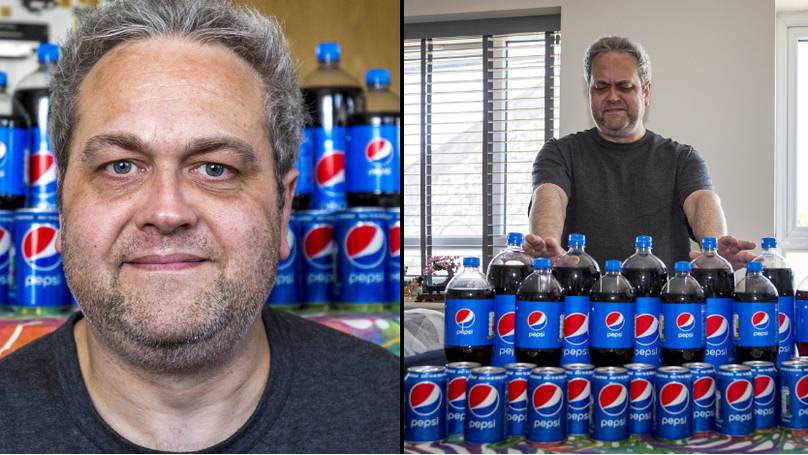 A supermarket worker has been addicted to Pepsi to the extent that he has been drinking 10 liters per day for 20 years.

Andy Currie, 41-, used to drink a liter of the drink in the morning and around nine liters more in the day, Newsweek reported.

Since developing the addiction in his 20s, the man has taken around 219,000 cans of fizzy drink. So, he sipped almost 8,000 kg of sugar through Pepsi. Currie said, “I’ve always loved the taste of a cold Pepsi. Nothing could beat it and I just got hooked. I work nights, so I always liked the sugar rush to keep me going. I’d go through four or five two-liter bottles of Pepsi every day. Because I work at Tesco, I could just buy it straight after work and take it home.”

Not just this, the man seems to have spent around $25 daily on Pepsi. It amounts to around $8,500 per year, as per the outlet. After the man’s body weight reached 266 pounds, he realized that it was time to keep a check on the habit. The doctors also warned him as he was at risk of developing diabetes. Now, he has managed to lose 28 pounds with exercise and diet.

He also took the help of a therapist and hypnotist David Kilmurry in London. Kilmurry said Currie had Avoidant Restrictive Food Intake Disorder (ARFID). In one session, he felt great and started drinking water instead of Pepsi.

In a month, he lost another 14 pounds, as per Newsweek. Currie claimed, “I haven’t touched them (Pepsi cans) in a month and don’t plan to. I prefer water now. My wife Sarah says my skin looks better and I’ve got so much more energy.” “This was by far the worst sugar addiction I’ve ever heard of,” Kilmurry added.