Why the BJP ‘worships’ Congressman Patel 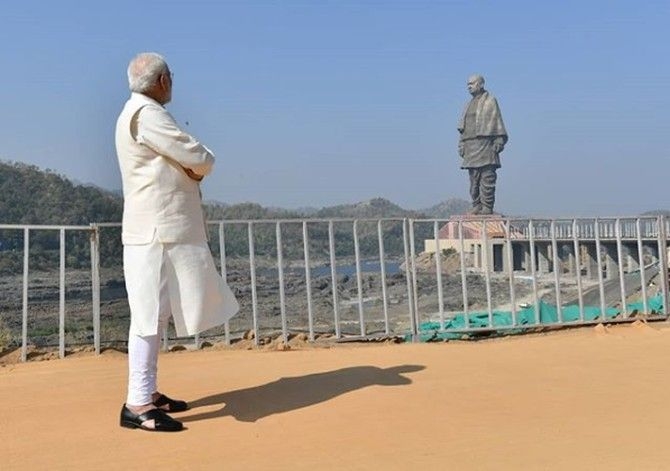 The proponents of Hindu Raj are desperate to appropriate some of the icons of the Congress, chief among them being Sardar Patel, who in February 1949 had rejected it as a ‘mad idea’.

On September 7, 1947, responding to the bloodshed, Sardar Patel declared in the presence of Jawaharlal Nehru and Lord Mountbatten, ‘I will not tolerate Delhi becoming another Lahore.’

He publicly threatened partisan officials with punishment, and at his instructions orders to shoot rioters at sight were issued.

Next morning, with utmost alacrity, a dedicated team of officials (including L K Jha, K B Lall) and volunteers were prepared to undertake three major tasks: Protecting Delhi’s Muslims; organising camps for frightened Muslims leaving their homes in Delhi and the neighbouring areas; and setting up camps for devastated Sikhs and Hindus arriving in the capital from West Pakistan, writes Rajmohan Gandhi, Patel’s biographer.

Patel himself toured the affected areas in Delhi, and kept himself informed throughout the day through Khurshid Ahmad Khan, Delhi’s chief commissioner, M S Randhawa, the deputy commissioner, Banerjee, the home secretary, and Sanjeevi, the intelligence chief. Just see the social composition of this bureaucratic machinery!

Unsurprisingly, just a few days before Gandhiji’s assassination, a Hindu Mahasabha activist in Bihar declared at a public meeting that Patel, Nehru and Azad should be hanged, against which Dr Rajendra Prasad wrote to Syama Prasad Mookerjee.

Contrast it with the Gujarat massacres of 2002. The then administration did not provide vehicles for many hours and delayed army action resulting into killings, as revealed by Lieutenant General Zameer Uddin Shah’s recent memoir, Sarkari Musalman.

Patel was extremely anxious about the safety of the dargah of Nizamuddin Auliya where many frightened Muslims had flocked for security. Sardar rushed to the shrine, ‘Let us go to the saint before we incur his displeasure’, stayed there for 45 minutes, talked to the hapless people and told the police officer of the area that he would hold him responsible ‘if anything untoward happened’.

Contrast it again with the conduct of the Gujarat administration in 2002 when the shrine of Wali Dakni was bulldozed and made untraceable forever.
Notwithstanding all these, and many such instances, while exposing the paradoxes of the politics of appropriation by the current majoritarian dispensation, one needs to look into this phenomenon a bit differently.

While the Hindutva forces choose to forget Sardar’s convictions, sections of Muslims as well as the Hindutva forces, quite selectively, tend to remember only certain aspects. For instance, Patel also told the Mahatma that Muslims not loyal to India should leave India, and he could not help adding that he suspected a majority of disloyalty.

Thus, sections of both communities have always been looking up to Sardar in selective and partisan ways. This is what makes these icons worth appropriating by the majoritarian reactionary forces.

The point therefore emerges that complex epochs of history need to be analysed and remembered in nuanced ways. That has never been easy even for the greatest of human beings.

In September 1947, Patel, the ruler, was happy that his Amritsar speech had made a deep impact and butchering was halted for peaceful migration of populations across the borders. Gandhi was unhappy about people leaving their homes and becoming refugees.

‘If Vallabhbhai differed from Gandhi, he clashed with (Maulana) Azad. In this stressful time, each thought the other communal, and while Azad blamed Patel for plumping for Partition and persuading Gandhi to acquiesce in it, Vallabhbhai could not forget the Maulana’s inability to prevent the qaum’s crossover to the (Muslim) League,’ notes Rajmohan Gandhi.

May it be added that Azad did not have this grievance against Patel, that quite a lot of Congressmen (not to say many other Hindus) were sympathetic to the Hindu Mahasabha-RSS kind of forces.

Likewise, a section of Muslims would not like to remember that Azad and Nehru had backed Patel on a pertinent issue: A majority of the Cabinet proposed that houses vacated by Muslims in Delhi first be offered to Muslims who had fled from their homes but wished to remain in India.

Believing that incoming Hindus and Sikh refugees had an equal right to the accommodation, Patel opposed this proposal, and Azad and Nehru endorsed Patel.

Let us make no mistake. Hindutva’s urge for persecuting minorities and this whole politics of brazenly opportunistic appropriation of certain makers of modern India are closely interlinked.

This is basically aimed at dwarfing and vilifying Nehruvian ideals. Why? Because, Nehruvian leadership is seen by Hindutva forces as the one which did not let them have their Hindu Raj; an ideal which made India a secular State ensuring minority rights.

The Hindutva proponents therefore prefer to look upon some icons as adversarial to Nehru, and have always assumed that had Sardar become the first prime minister of India, it could never have become a secular State. They therefore conveniently choose what to remember about the Sardar and what not to.

That in late February 1950, Nehru had actually offered the post to Patel and go on a tour to East Bengal the way Gandhi had done, and that Patel took not a minute to turn it down, is best forgotten by the saffron forces.

They also choose to forget that, it was only with Patel’s support that in April 1950 a pact was signed with Pakistan’s Liaquat Ali Khan, that the two governments will ensure equality of citizenship to their respective minorities; constitute minority commissions and commissions to inquire into riots; and place minority representatives in the governments of the two Bengals and Assam.

Similarly, the attempt at appropriating Subhas Chandra Bose is guided by the motive of winning over the hearts and minds of the Bengali populace in whose case they choose to forget Bose’s consistent position against Hindu and Muslim communalism. Bose’s militarism also fits into the muscular nationalism espoused by Hindutva.

Their urge to believe the mysteries around his death in air crash in 1945 is basically an expression of their suppressed desire that had Bose been around, he would have made an India quite different from what Nehru envisioned and made.

Bose’s descendent and biographer Sugata Bose, a historian of repute and currently a parliamentarian, expressed his anxiety thus, ‘Having become an icon among icons of the freedom struggle, Netaji has been subject to political appropriation, especially on the eve of elections. The Hindu Right lauds his military heroism, ignoring his deep commitment to Hindu-Muslim unity and the rights of religious minorities.’

Such ‘suppressed’ Hindutva urge to keep the minorities thoroughly subjugated has been getting renewed traction and support since the 1980s, precisely because of the slow but visible emergence of middle classes and affluent segments among Muslims. Some of them have shown their presence in the media and academia by articulating their views.

The current dispensation has added reason. Demonstrating and perpetuating Gujarati pride (asmita), through Patel’s large statue, the incumbent regime intends to relegate all the disenchantment to the background, just as by fanning communal polarisation and majoritarian consolidation they intend to cover up their miserable failures on corruption, unemployment, inflation, etc.

Majoritarian reactionary forces of homogeneity often play up things in such strange ways, just as Pakistan plays up blatant Islamism to suppress federal aspirations of its regional units as well as to discriminate against its minorities.

The Hindutva forces in India don’t actually hate Pakistan. They, in fact, resent that they were not allowed by the Nehruvian leadership to let India replicate Pakistan’s blatant majoritarianism.

Since they had stayed away from the freedom movement, they cannot push their project without appropriating some of the tallest makers of modern India.

In their bid to imitate the worst characters of their neighbourhood, they may clinch electoral successes in few elections the way Turkey’s Erdogan and Brazil’s Bolsonaro have also done in recent times. But the damage they will inflict upon their countries will have implications.

This is what is learnt from the last hundred years of world history.

Right-wing reaction thrives on falsehoods and on selective appropriation of history and history-makers. But, at the same time, humanity has also learnt that all such forces do meet their nemesis very soon.

For this to happen, one of the many pertinent tasks should be to educate the citizens. Vernacular renderings of comprehensive, well rounded biographical accounts should be brought out and put in circulation.