Watch: Nagpur traffic police lift scooter from no parking zone with its owner atop 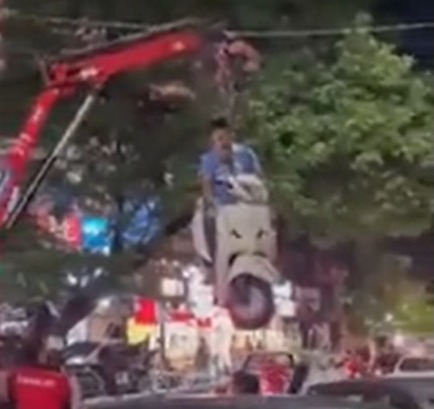 A peculiar video has been doing the rounds on social media, where Nagpur police personnel could be seen lifting a scooter parked in no-parking zone along with its owner sitting on it.

The incident reportedly took place on July 22 in Anjuman Complex area of Nagpur.

The man, lifted up on scooter, can be seen talking to the crane driver, while latter whisks his vehicle away from no-parking zone.

Bystanders can also be seen witnessing the rare event.

Nagpur Municipal Corporation (NMC) and traffic police have reportedly resumed lifting of two-wheelers and towing of four-wheelers from no-parking zones. Along with this, a fine of Rs 760 is being collected from motorcyclists and Rs 1,020 for four wheelers.