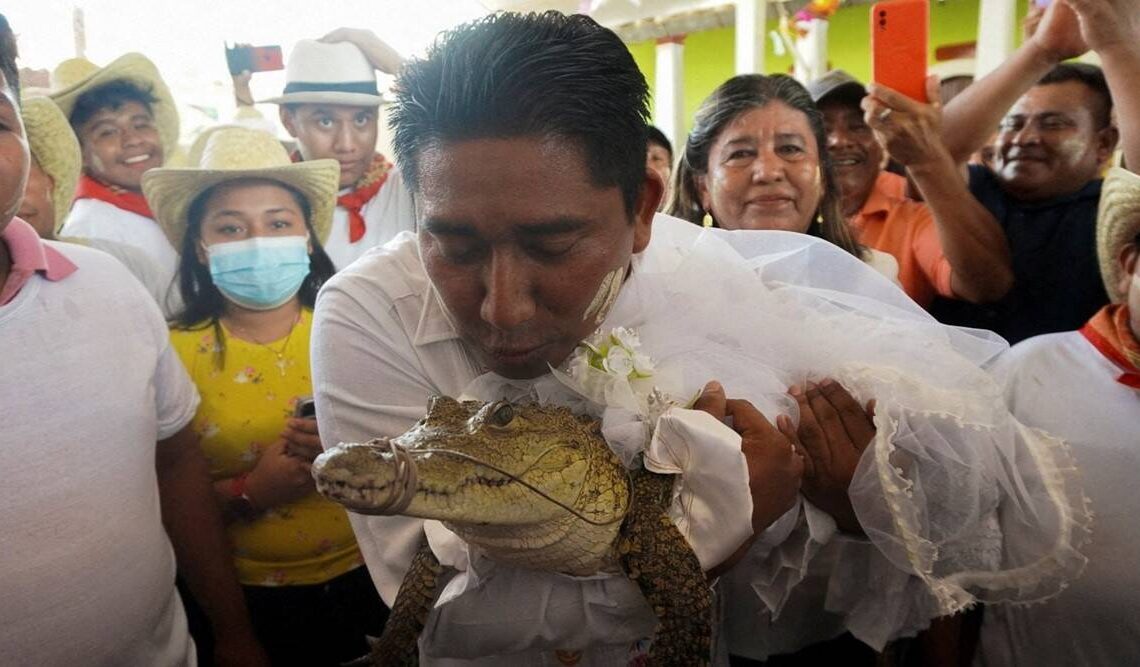 A  Mexican mayor married an alligator with complete rituals as a part of the centuries-old rituals.

Mayor Victor Hugo Sosa got married to an alligator dressed in a white wedding dress. This ancient ritual of San Pedro Huamelula in southwestern Mexico is believed to bring abundance to the village.

The seven-year-old alligator is known as the Little Princess and villagers believe her to be a deity representing Mother Earth. After the wedding, Victor also sealed the union with a kiss, which apparently symbolizes the joining of humans with the divine for the locals.

The wedding was celebrated with traditional music with trumpets and drums and dancing revelers. The mayor carried the alligator bride in his arms through the streets while men fanned it with their hats. The godmother of the village, Elia Edith Aguilar, organized the wedding. She told to Reuters, “It gives me so much happiness and makes me proud of my roots. It’s a very beautiful tradition.”

The alligator’s snout was tied shut to avoid unwanted biting while the mayor kissed her multiple times throughout the ceremony.

In an age-old ritual, a Mexican mayor married his alligator bride to secure abundance. Victor Hugo Sosa sealed the nuptials by kissing the alligator’s

Reportedly, this bizarre tradition of marrying an alligator for the well-being of the village dates back centuries, to pre-Hispanic times, among Oaxaca state’s Chontal and Huave indigenous communities.

Mayor Sosa said that they ask nature for enough rain, and enough food and that they have fish in the river. San Pedro Huamelula is a small fishing village on Oaxaca’s Pacific coast.