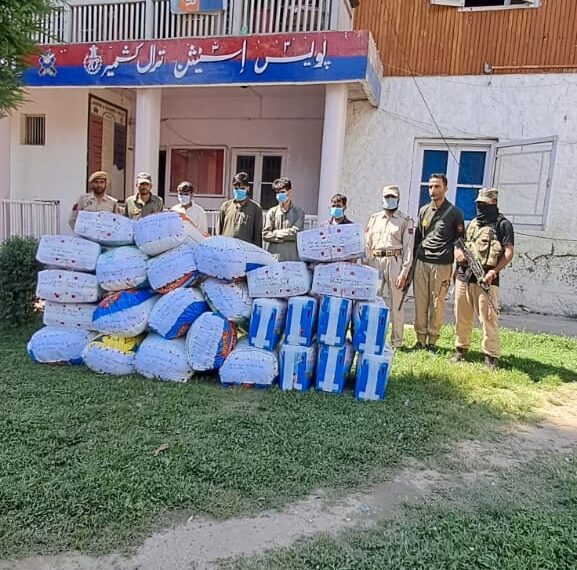 Srinagar: Police have arrested four drug peddlers and recovered a huge quantity of a contraband substance from their possession in Awantipora.

Police Station Tral received specific information that Showkat Ahmad Bhat of Nadar has hoarded a huge quantity of a narcotic substance in his residential house.

A police party led by SHO Tral along with the Executive Magistrate raided the specific house. During the search, officers were able to recover 433 Kg of ground Poppy Straw from the residential house.

The accused along with the other three associates were arrested on the spot. They have been identified as Tawseef Ah Rather of Panner, Tral, Muzafar Ah Lone of Check, Noorpora, and M Saleem Khan of Handoora. They have been shifted to the police station where they remain in custody.

Accordingly, a case under relevant sections of law stands registered at Police Station Tral and further investigation has been initiated.

“Community members are requested to come forward with any information regarding drug peddlers in their neighborhood. Persons found indulging in drug peddling will be dealt with as per law. Our consistent actions against drug peddlers should reassure the community members that we are making efforts to keep our society free from the scourge of drug menace,” police said.