Video: How people celebrated wedding of cats in war-torn Yemen 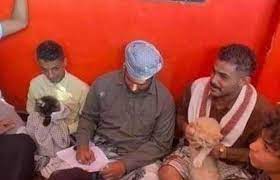 Aden:  Believe it or not, people celebrated the wedding of two cats in war-torn Yemen.

Social media users circulated a video of the event, which showed a person reciting a marriage contract between two cats and taking two footprints of the two to make the matter official.

Guests were invited to the party after the distribution of invitations that were prepared and printed.

The video spread widely on social networking sites and received humorous and satirical comments. The video also received negative feedback where viewers demanded the arrest of the people behind the video.