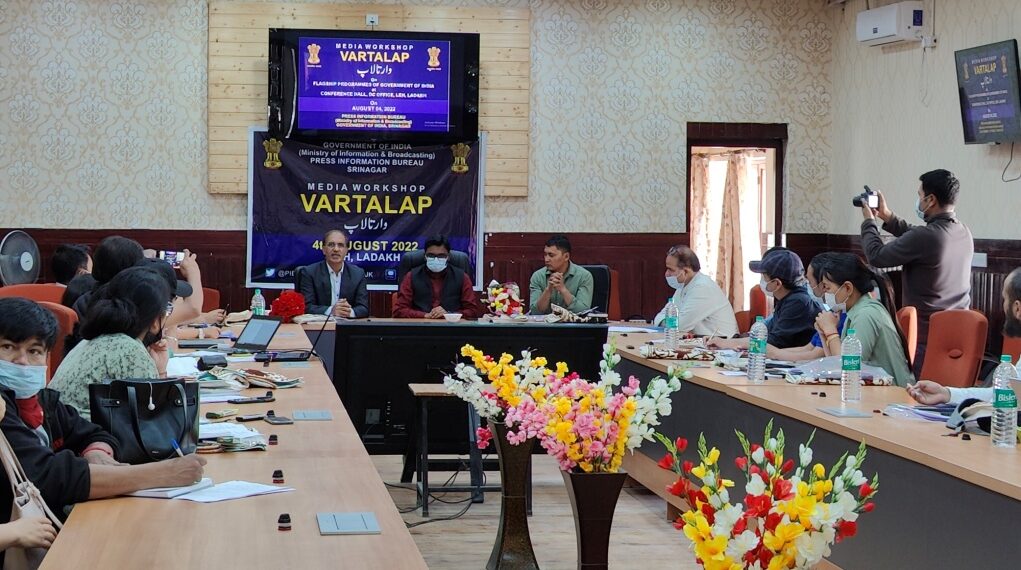 Leh: There is a dire need to strengthen the bridge between government and media to ensure seamless information exchange, said Additional Director General (Region), PIB J&K and Ladakh Rajinder Chaudhry during his keynote address in a media workshop ‘Vartalap’ organized at Leh today.

The workshop was organized by the Press Information Bureau, Srinagar to sensitize journalists about various Central Government schemes meant for the welfare of common citizens.  Titled “Vartalap”, the workshop is part of the Ministry of Information and Broadcasting’s media outreach strategy and is conceptualized to act as a bridge between the masses and the government by empowering journalists and making them aware of their responsibilities towards society.

The proceedings of the workshop were conducted by Deputy Director PIB Srinagar, Tariq Rather. More than 40 journalists from District Leh attended the workshop.

Deputy Commissioner, Leh, Shrikant Balasaheb Suse was the Chief Guest on the occasion. Addressing the gathering Suse expressed happiness that such a vital program was being organized at Leh. He underlined the importance of tools of communications deployed by various wings of the Ministry of Information and Broadcasting.

The participants of the workshop will deliberate on how to make the best use of these tools of information and communications to further the key messages for proper implementation of Central Government schemes and initiatives at the grassroots, Suse added.

Suse said that after the formation of Union Territory, a transformation has taken place and there is a lot to be spoken about. Units of the Ministry of I&B especially the Press Information Bureau have to play a pivotal role in highlighting the best works and successful implementations of Central Government schemes. Steps must be taken up to disseminate this information nationally, he further added.

Suse also desired that a PIB establishment may be set up in Ladakh to bring out these stories from the source. The UT has done some remarkable implementations like Jal Jeevan Mission that have been lauded by all. Need of the hour is to take this good work to other regions, he added.

During his address, Chaudhry said that the media acts as the eyes and ears of the government.

Chaudhry opined that the media needs to maintain checks and balances and that journalists should practice balanced journalism by giving coverage to all aspects of a story. He said that journalists should take benefit from the information shared by various government agencies through social media and help propagate the message of development among the masses. He also spoke about PIB Fact Check which can help negate fake news.

ADG PIB also gave a detailed presentation on the occasion about the working of PIB and other allied media units of the Ministry of Information and Broadcasting. Chaudhry impressed upon the media persons to join the Har Ghar Tiranga movement with fervor to make it a success. Joint Director Central Bureau of Communication J&K and Ladakh. Ghulam Abbas was also present in the workshop.

The workshop also consisted of a series of lectures given by various experts. Majid Pandit, M&CO, PIB Srinagar spoke about the impact of social media on the authenticity of news and journalistic responsibilities. Terming social media as a vital channel to disseminate information, he said that there is a need to understand the power lying beneath different social media platforms.

Dr. T Namgyal, District Information Officer, Leh said that there is a need to provide a balanced version of any narrative. He also highlighted the challenges faced by the journalists while working on a story. There is a need to offer seamless information from a government perspective. Dr. Namgyal also showed keen interest in conducting tours under the aegis of the Ek Bharat Shreshta Bharat initiative. He desired that the Journalist Welfare Schemes need to be refined and explored for the upliftment of the journalist community of the region.

The lectures were followed by interactive sessions in which participants put forward their comments and observations with the experts. The journalists expressed gratitude for the holding of the workshop and wished for more such events to be held in the future.

The program was conducted in collaboration with district administration Leh.