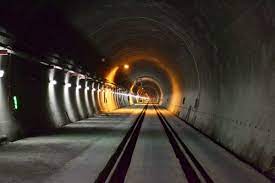 The tunnel is part of the Udhampur-Srinagar-Baramulla Railway Line (USBRL) project. This is the third tunnel following the 12.6 km tunnel T-49B, the longest tunnel of Indian Railways, which was completed in January this year.

On August 14, the overarch deck of the world’s highest railway bridge on Chenab was completed. The breakthrough was executed by conducting a blast and with it, the work on the escape tunnel T-13 was started, said the officials engaged in the work.

“We have succeeded in completing the construction work on the tunnel between Dugga and Sawlakote stations in the Katra-Banihal section of the Udhampur Srinagar Baramulla Rail Link (USBRL),” an official said on Monday.

The Dugga railway station located on its Jammu end has been connected with Basindadar (Sawalkote) railway station towards Srinagar end by completion of this tunnel, the officials said.

“Two out of seven railway stations located in the Katra-Banihal section of this railway project have been connected through this tunnel,” they said.

Of the 272-km USBRL project, the work on 161 km was commissioned in phases. The first phase of the 118-km Qazigund-Baramulla section was commissioned in October 2009, followed by the 18-km Banihal-Qazigund in June 2013 and the 25-km Udhampur-Katra in July 2014.

Udhampur-Srinagar-Baramulla Railway Line (USBRL) is a national project that will connect Kashmir valley with the rest of the country through an all-weather railway network. The total length of the USBRL is 272 km. Of which 161 km has already been commissioned, while work is in progress on the 111-km-long Katra-Banihal stretch. The Katra-Banihal section comprises 27 main tunnels and 8 escape tunnels. Around 87% out of 111Km of the section is covered in tunnels.

Jammu and Kashmir is a landlocked region. Connectivity has always been a problem. There is only one highway that connects Srinagar to Jammu. Traveling often is a problem because the highway is prone to landslides and avalanches. During winter, traveling on the highway is very difficult as it remains closed for weeks due to inclement weather.

Maharaja Pratap Singh had dreamed of the Kashmir rail project in 1898.  A project was sanctioned in 1905 but it could not be implemented.  After independence, Jammu got connected with the rest of India through rail. Indira Gandhi started work on the difficult Chenab section (which included Kashmir) in 1983.

This rail project will provide all-weather connectivity to Kashmir and boost industrialization and other economic activities in the valley.