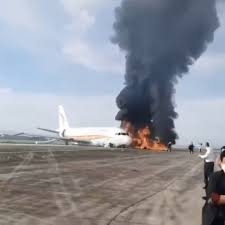 Beijing, May 12: Over 40 people were injured when a passenger plane of China’s Tibet Airlines with 122 people on board veered off the runway and caught fire while taking off in the country’s southwest Chongqing city on Thursday.

All 113 passengers and nine crew members aboard the flight from Chongqing to Nyingchi in the Tibet Autonomous Region had been safely evacuated, Tibet Airlines said.