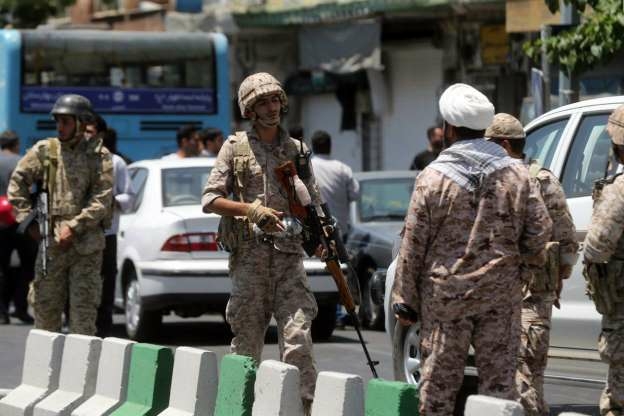 Tehran: A suicide car bombing on a Revolutionary Guards bus in southeastern Iran killed 27 troops , in one of the deadliest attacks on the elite forces in years.
The assault came as the troops were returning from a border patrol mission, the Guards said in a statement.

“In this terrorist attack 27 of Islam’s brave warriors were killed and 13 were wounded,” the statement read, accusing “world domination and Zionist intelligence agencies” of supporting the attackers.

A picture released by the semi-official Fars news agency showed a hulk of twisted metal lying by the side of a road, unrecognisable as a bus.

The attack happened when “a car filled with explosives blew up besides a bus”, the Guards said.

“Mercenaries of intelligence agencies of world arrogance and domination,” carried out the attack to counteract “the victory of the 40th anniversary of the Islamic revolution”, they added.

Iran has been celebrating the 40th anniversary of the return to Tehran of Ayatollah Ruhollah Khomeini in 1979 after more than 14 years in exile and the overthrow of the pro-Western Shah.

Wednesday’s attack took place in the volatile southeastern province of Sistan-Baluchistan which has a large, mainly Sunni Muslim ethnic Baluchi community straddling the border with Pakistan.

The SITE Intelligence Group reported that the attack was claimed by Jaish al-Adl, a group formed in 2012 as a successor to the extremist group Jundallah (Soldiers of God), which waged a deadly insurgency against Iranian targets over the past decade.

The Jaish al-Adl — blacklisted as a “terrorist group” in Iran — “announced its responsibility in a brief Persian message on February 13, 2019,” SITE reported.

The attack came on the same day as the United States gathered some 60 countries in Poland for a conference on the Middle East and Iran which they hoped would increase pressure on Tehran.