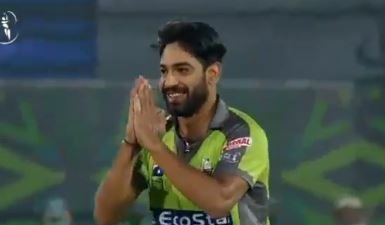 In the second eliminator match in Pakistan Super League (PSL 2020), the Lahore Qalandars team performed well, beating Multan Sultans by 25 runs and made their place in the final of the tournament. Batting first, the Lahore team scored a strong total of 182 runs, losing 6 wickets in 20 overs, on the basis of an innings of 46 runs in 38 balls of Fakhar Zaman.

In response, Multan’s team were all out for 157 runs in 20 overs despite Adam Lyth’s innings of 50 runs. In this match, Multan batsman Shahid Afridi could not even open his account and he was bowled clean by Harris Rauf. Harris also apologized with folded hands soon after bolstering Afridi.

Harris Rauf was throwing the 14th over of Multan Sultans’ innings and Shahid Afridi was at the crease to face the fifth ball of the over. Harris Rauf bowled a superb yorker and Afridi was clean bowled on that ball. Afridi was dismissed on his first ball of the match. After dismissing Afridi, Harris Rauf immediately apologized to him with folded hands and appeared quite happy. This video of him is going viral on social media.

Lahore Qalandars have won the match and made it to the finals of the Pakistan Super League, where they will face the Karachi Kings. Multan’s team suffered a defeat in the Super Over at the hands of the Karachi Kings in a qualifier match.