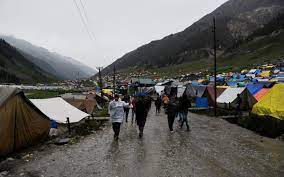 An official said due to inclement weather no Yatri is being allowed to go ahead of Nunwan base camp in Pahalgam towards the holy cave.

He said Yatra has been temporarily suspended for the safety of Yatris and presently around 3000 Yatris are staying at Nunwan base camp.

Meanwhile, around 65,000 pilgrims have paid obeisance at the holy cave shrine so far.