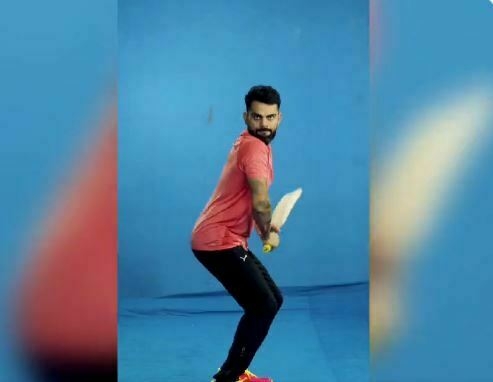 It is getting funnier in the run-up to the T20 world cup.

“Hi, this is Virat Kohli and I’m going to mimic Shikhar Dhawan because I feel he is lost in his space so much, it’s very funny and I have seen it many times from the other end,” Kohli said.

Before taking guard, Kohli folds his sleeves up in trademark Dhawan style.

Dhawan scored 587 runs from 16 for Delhi Capitals in the Indian Premier League. Kohli, on the other hand, led Royal Challengers Bangalore to the playoffs, after finishing third in the league stage.

However, the team’s Eliminator loss against Kolkata Knight Riders meant his IPL captaincy stint ended without a title.

Last month, the 33-year-old announced earlier that the 2021 edition will be his last at the helm of RCB. He had also said he will step down as India’s T20I skipper post the conclusion of the T20 World Cup in the United Arab Emirates and Oman this year.

As for Dhawan, the southpaw is not a part of the Indian squad for the multi-team tournament despite an enviable record in ICC events.

The word from the BCCI office-bearers has been that he was rested for the tournament, although he remains to be an “important player”.

“Shikhar is a very important player for us. Can’t disclose the discussion. He is in the loop. We thought the need of the hour was to look at others and rest him,” Team India chief selector Chetan Sharma had said during a virtual press meet on the day of India’s squad announcement.

In his absence, either one amongst KL Rahul, Ishan Kishan, and Kohli remain the likely contenders to open the innings alongside Rohit Sharma. India will begin the Super12 campaign on October 24 against Pakistan.