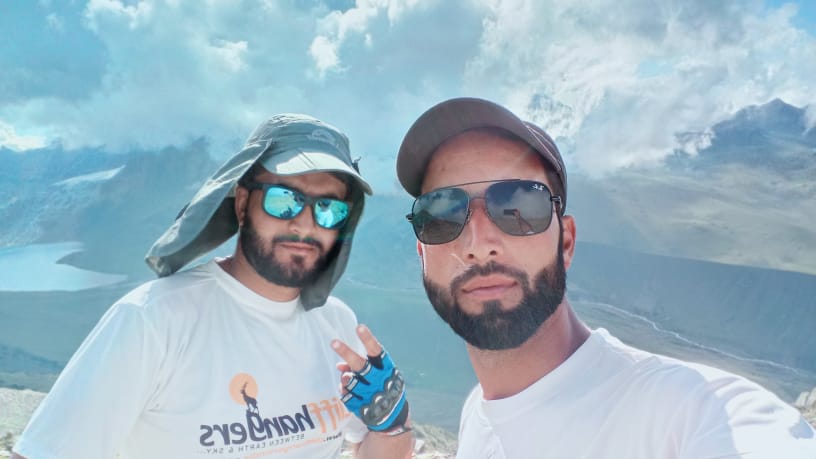 Srinagar: A mere discussion about the future of the sky marathon, a popular adventure sporting activity in Europe, prompted Javed Khan, 27, and Aijaz Raina, 28, to do unimaginable and create a history.

Khan and Raina have become the first trekkers from Jammu and Kashmir to complete the sky marathon on the Great Lakes Trek route from Lashpathri Sonamarg to Naranag in a record time. The subtext of the expedition was to raise awareness about drug abuse in Kashmir.

Khan and Raina completed the distance of around 72 kilometers with a peak elevation of more than 13000 feet from Lashpathri Sonamarg to Naranag in just 15.3 hours.

The total moving time of the marathon was only 11.13 hours and it is the first time that a sky marathon was held on the Great Lakes trek route.

“We started our marathon on August 30 at 4:10 pm and completed it the next day at 7:39 am. The moving time was 11 hours and 13 minutes, which contained 84082 steps. It was a dream come true. We completed the first sky marathon in a record time,” Khan told The Kashmir Monitor.

It takes 6 to 7 days for trekkers to complete the trek on the great lakes of Kashmir.

Popularly known as `Sherpas of Kashmir’, the duo said the main motive to undertake the expedition was to introduce a sky marathon in the valley.

“I have been trekking for the last seven years. So, we started this journey to inspire our youth towards trekking, particularly the sky marathon, which is popular in European countries. The other motive was to wean away our youth from drug addiction,” he said.

Raina said they braved the weather vagaries and other challenges to accomplish the mission in the shortest possible time. “We had to choose the normal trek and the time constraint was there. The journey was tiring but satisfying when we accomplished it in a record time,” he said.

Raina said they will sky marathon other peaks of the valley to make it a popular trend in India. “We will continue sky marathon and scale mountains including Sunset peak. We hope our expedition will inspire other youth to take a similar journey in coming years,” he said.