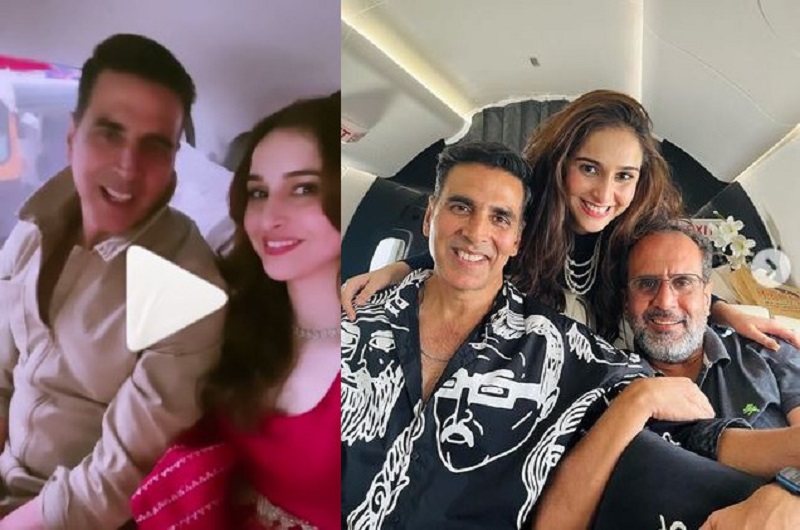 Sadia Khateeb, the Kashmir-born Bollywood actress, who will be seen in Raksha Bandhan, turned into a Kashmiri teacher to her co-star Akshay Kumar.

In a video gone viral on social media, Sadia is seen asking Akshay if he can speak anything in Kashmiri. “Akshay sir, can you say something in Kashmiri,” she asks. To it, he responds: “Sadia Khateeb cha wariya asal koor (Sadia is a good girl)”. Sadia adds to it “very good girl”.

The two are seen travelling in a car in some crowded place.

The video has since gone viral.

Sadia Khateeb, who marked her big screen debut with Vidhu Vinod Chopra’s Shikara (2020), is now gearing up for her second release Raksha Bandhan.

The film is based on the beautiful relationship of brother-sister and the dowry issue that still exists somewhere in the interiors of India.

Akshay Kumar is headlining the film and plays brother to her and three other debut actresses in the film which will release on August 11.

Speaking to Free Press Journal, Sadia said: “When my debut film Shikara came, just after that, the lockdown happened. A couple of projects came my way, but they weren’t exciting enough for me. I remember talking to my first co-actor Aadil Khan about this. I told him I want my second film to be a bang on and we both won’t pick up a project until or unless it is bang on and today here I am. I don’t think there would be any other film in place of Raksha Bandhan as my second film.”

Elaborating further, she adds, “I clearly remember that while I was promoting Shikara, one journalist told me that I would face difficulties and hardships in getting my second film but I didn’t really bother about it. I waited for so long and then Raksha Bandhan came my way. I picked it up because back then, it was the best offer amongst others but when I saw the film recently, I just thanked Allah miyan for sending this film to me since this is exactly what I wanted. Sometimes you don’t know what you want, you only know once you get it.”