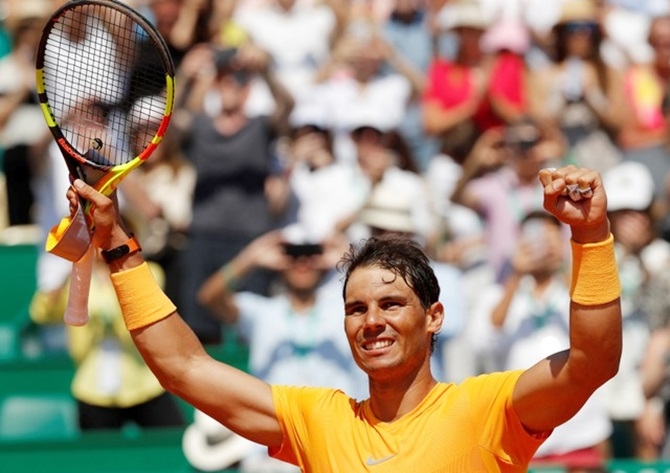 Thiem, who had beaten Nadal twice on clay previously, was considered as the Spaniard’s toughest opponent heading into the tournament but he crumbled in the Monaco sunshine.

The world number one won nine straight games before Thiem even got on the scoreboard, drawing sympathetic cheers from the crowd.

The 31-year-old brought up match point with a blistering forehand winner and wrapped up the contest when Thiem fired a backhand into the net, his 25th unforced error.

It was a ruthless display from the 10-times champion, who will next face Bulgaria’s Grigor Dimitrov for a place in the final. Nadal has to win the tournament to stop his rival Roger Federer regaining the top ranking.

“I think I played a great match — the best of the tournament,” Nadal said.

“I played very aggressive, I knew I couldn’t give Dominic time to hit the ball and I didn’t.”

Dimitrov made the most of a second-set collapse by David Goffin to reach the Monte Carlo semi-finals for the first time with a 6-4, 7-6(5) victory.

After conceding the opening set, Goffin raced to a 5-1 lead in the second but wasted three opportunities on his own serve to force a decider.

Dimitrov, who has struggled on clay in the past and has never progressed past the French Open third round, broke twice and sealed the victory in the tiebreak to record one of his best performances on the surface.

The 28-year-old served for the match at 5-4 in the second set, but Cilic, the Australian Open runner-up, roared back to save three match points and went on to claim the tie-breaker in style.

Nishikori regained his composure to secure a crucial break in the eighth game of the decider as he clinched a semi-final berth in just under three hours.

He will next meet Germany’s Alexander Zverev, who came back from a set down to beat Frenchman Richard Gasquet 4-6, 6-2, 7-5.