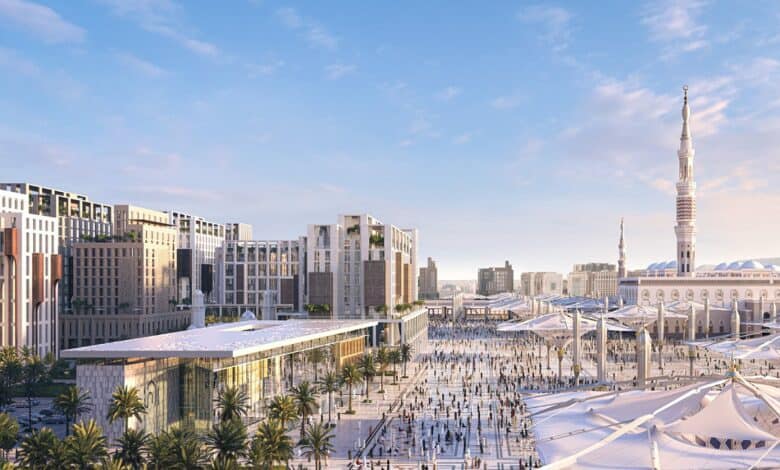 The project is in line with the objectives of the Kingdom’s Vision 2030 in raising the capacity to facilitate hosting 30 million pilgrims by 2030.

Crown Prince Mohammad bin Salman said the project will be implemented according to the highest international standards, which reflects the Kingdom’s keenness to raise the level of services provided to pilgrims in Madinah, as a modern Islamic and cultural destination.

The project will be built on a total area estimated at 1.5 million square meters and aims to establish 47,000 hospitality units by 2030. In addition to open squares and green areas that facilitate visitors’ access to the Prophet’s Mosque, 63 percent will be allocated as areas open and green spaces in the project space.

It will have integrated transportation solutions that include 9 bus stops for visitors, a metro train station, a track for self-driving vehicles, and underground parking, to facilitate the movement of visitors to the Prophet’s Mosque, which contributes to supporting residential and commercial activity, as well as provide a total of 93,000 job opportunities.

The project aims to improve the services provided to pilgrims in Madinah as a modern Islamic and cultural destination, as it relies on modern urban planning mechanisms, concepts of comprehensive development, and advanced infrastructure that provides innovative services.

The project also contributes to improving the quality of life and enhancing comfort and luxury, thus enriching the experience of the residents and visitors of Madinah, as it will enhance the level of services provided to them, and raise the hotel capacity and quality of services east of the Prophet’s Mosque.

The initiative is being overseen by Rua Al Madinah Holding Company, a Public Investment Fund group that specializes in the development, operation, and property investment in Madinah.