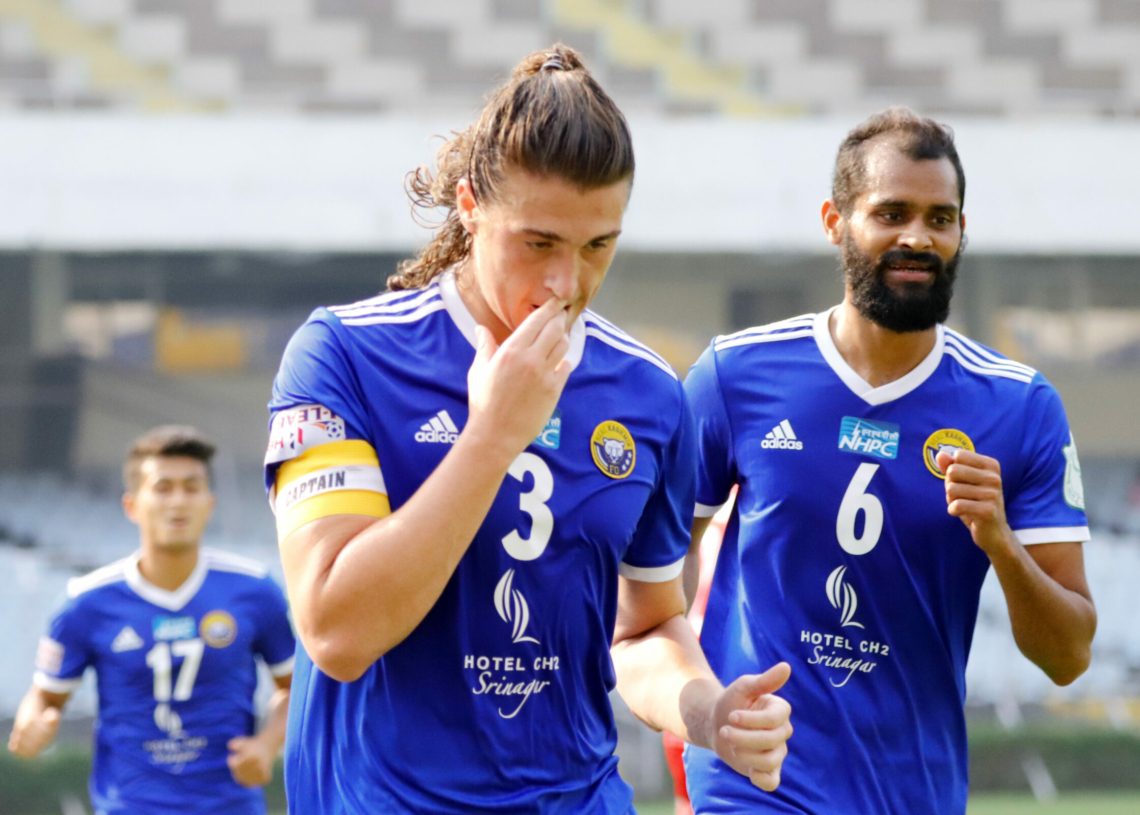 Kolkata: Real Kashmir came from a goal down and produced a stellar second-half performance to defeat Aizawl FC 3-1 at the VYBK Stadium in Kolkata, West Bengal today (February 23, 2021) to confirm their spot in the top six of the Hero I-League table.

After a defensive error had given Aizawl FC the lead through Lalremsanga in the 26th minute, Lukman Adefemi’s strike in the first half and a brace by Mason Robertson in the second, led the Snow Leopards to register a thumping win over their opponents. With this win, Real Kashmir FC extended their unbeaten streak to nine games and could remain top of the Hero I-League table, if Churchill Brothers drop points against NEROCA tomorrow.

In what was a cagey half between two opponents that cancelled each other out, it took two moments of defensive errors from either team to let the other score. However, it was Aizawl FC who tried to breach the Real Kashmir FC citadel with their possession-heavy style of football from the opening minutes.

In the 8th minute, Real Kashmir FC’s goalkeeper Mithun Samanta was forced to make his first save of the match when some handy work inside the box led Ramhlunchhunga to release a venomous shot. But to no avail, as Samata kept him out.

The Snow Leopards, boasting one of the best defences of the Hero I-League so far, relied on their style of counter-attacking and direct football. That almost reaped dividends for them in the 14th minute when midfielder Farhan Gani won back possession and launched Dipanda Dicka onto goal. However, before releasing his shot, that would have been a sure goal, Dicka’s strike was cut short by a crunching Lalchungnunga tackle.

But, a defensive error in the 26th minute led the Snow Leopards’ defence to crumble while giving Aizawl FC the lead. A goal-kick by Aizawl FC’s custodian was misjudged by Mason Robertson and the ball bounced over him as it caught Pawan Kumar in an awkward position. It ultimately led to Lalremsanga picking up the pieces and slotting it past a hapless Mithun Samata.

Real Kashmir trailed only eight minutes and in the 34th minute, Robertson made amends. With the Aizawl FC defence switched off, Robertson’s long throw-in from the left flank found Lukman Adefemi, who thumped home a header from close range to restore parity.

After the half-time scoreline read 1-1, the Snow Leopards were given a golden opportunity to surge into the lead when Lukman Adefemi’s header off a Mason Robertson cross forced the opposition goalkeeper into a decent save. The rebound, however, found Dipanda Dicka inside the box, but with the goalkeeper out of his line and no real covering at goal, Dicka skied his shot from close range as Aizawl survived.

Yan Law’s side were not so lucky in the 56th minute. Pratesh Shirdokar’s free-kick from distance found Mason Robertson in the box and Robertson’s free header found the bottom-right corner to hand Real Kashmir the lead.

In the 68th minute, Mason Robertson’s long throw-in once again found Lukman Adefemi inside the box in almost a replay of the first goal. However this time, the Aizawl FC goalkeeper heroically saved Adefemi’s header to deny him from close range.

The Scotsman Robertson was not done with the action, however. In the 72nd minute, he stood tall over a free-kick from 30 yards out and curled it into the back of the net as his delivery had tremendous pace and curve to give Real Kashmir a two-goal advantage as the scoreline read 3-1.

Though Aizawl FC tried to make a comeback, the lead proved to be unassailable for Yan Law’s side as the full-time scoreline read 3-1 in the Snow Leopards’ favour. With this loss, Aizawl FC sit on 12 points out of 9 matches and could find themselves in the bottom half of the table before the round ends. (Courtesy: i-league.org)