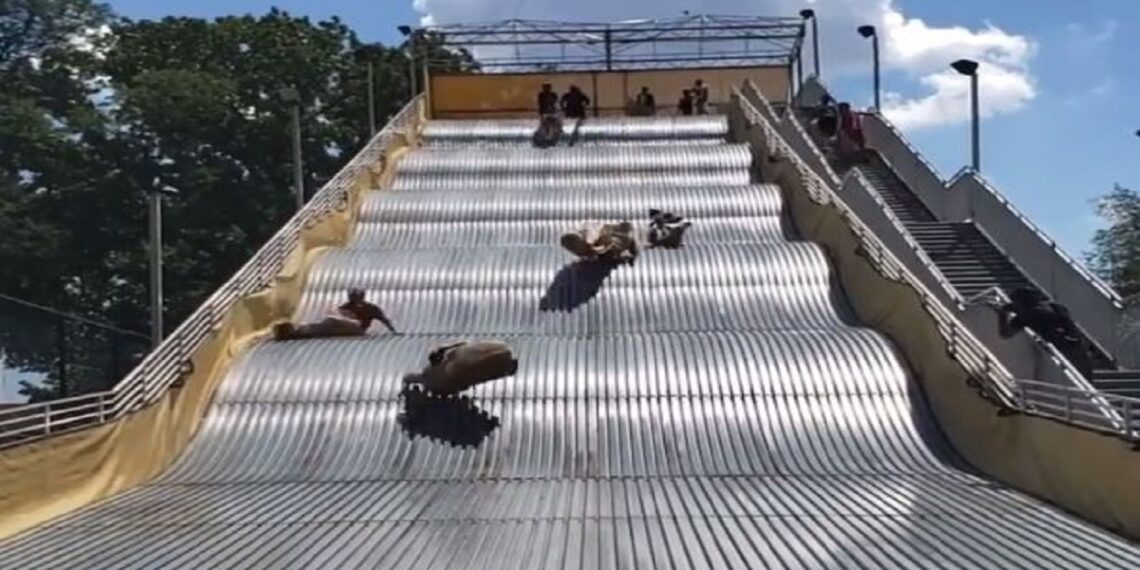 They thought they made a fun slide that children already love and would also get the adults excited however makers of a giant slide in the United States were forced to shut the operations hours after opening because they had not really taken Physics into account.

A viral video of several people being tossed up and down on the giant slide has raised safety concerns compelling the authorities to close the slide soon after.
The huge slide in Michigan’s Belle Isle Park re-opened on Friday and was then closed just hours later as parents voiced safety concerns.

A video of the chaos caused by the historic ride has since been shared on Twitter. It shows several people riding the slide which flung them into the air and sent them crashing down with a thud.

Watch the video below:

Since being shared, the video has accumulated more than 11 million views. While some internet users were astonished that it took so long to realise its safety concerns, others simply found the clip hysterical.

“This made me laugh out loud hard! Sorry but 4 hours to notice this was not ok? Omg,” wrote one user. “This is one of the best illustrations I’ve seen of why math calculations and engineering is so important,” said another.

“If 2022 was a slide,” jokingly commented third, while a fourth added, “The Giant Slide on Belle Isle is the BEST and it’s functioning exactly like it’s supposed to. You haven’t had a real 313 childhood unless you bounced down the Slide and got a 3rd degree let burn on a summer’s day.”

Meanwhile, speaking to ABC13, park visitor Kenyatta Mcadney said the fun turned to fear for his kids as speed became an issue. “What I noticed was the impact they were hitting the ground with coming off the hills,” he said. Mr Mcadney’s child Keymarr added, “I was going down was faster than I thought I was. Gravity hurts.”