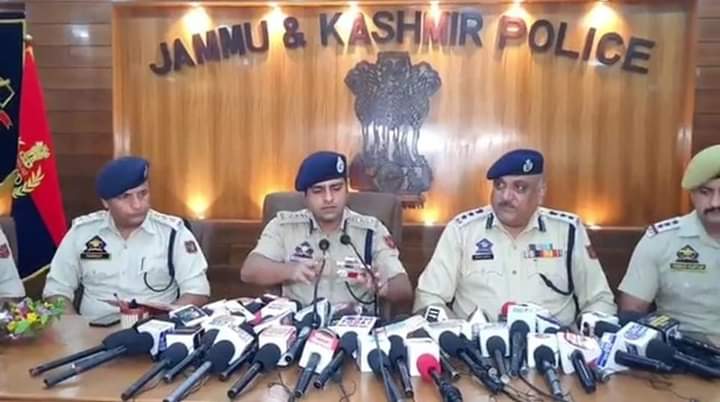 Jammu: Six people, including five members of a family, who were found dead inside two houses here 10 days ago, died of an overdose of drugs, which they decided to take to end their lives, a senior police officer said on Saturday.

Noor-ul-Habib is believed to have convinced the five members of the family — an elderly woman, her specially-abled daughter and son, another daughter and grandson — to commit suicide as both the families were under depression due to pending court cases and medical reasons, Senior Superintendent of Police, Jammu, Chandan Kohli told reporters here.

He said two people — a health worker and a plumber — were arrested for not informing police on time, which could have saved their lives.

Flanked by the four members of a Special Investigation Team (SIT) that was formed to crack the mysterious deaths in the Tawi Vihar locality of Sidhra on August 17, the officer lauded their hard work and professional investigation.

”According to our investigation, Habib moved to Jammu in 1997. He used to financially help his next-door neighbour Sakeena, who worked as a domestic help at his home. Hailing from Doda district, Sakeena was facing several court cases and two of her children were specially-abled,” Kohli said.

He said after appearing in a court case in the first week of August, Habib convinced Sakeena, her daughter Rubeena and grandson Sajad Ali to end their lives.

Police recovered the bodies of the four from Habib’s house on August 17, while the bodies of Sakeena’s differently-abled children — Zaffar Salim and Naseema — were found in their house after Habib’s sister Shahzada, a resident of Srinagar, informed police that her brother was not answering the phone.

”The bodies were taken to the GMC hospital where the autopsy was performed by a board of doctors in the presence of a magistrate and the process was videographed. The viscera samples were sent for a chemical examination in the Forensic Sciences Laboratory,” Kohli said, adding that the final autopsy and FSL reports are still awaited.

Referring to the investigation during which police obtained CCTV footage, call recordings and bank account details, he said Sakina’s specially-abled children were the first to die of a drug overdose on August 12, followed by Sakeena on August 14 and the others on August 15. ”They started working on their plan on August 5 by bringing cannulas, drips and medicines from chemist shops and deactivating the CCTV the next day. The services of health worker Sanjeev Kumar, who was known to Habib, were utilised to fix the cannulas on all of them, while plumber Vijay Kumar was paid Rs 2.5 lakh by Habib to dig a pit in Sakeena’s house.

The SSP said the health worker and the plumber were arrested for not informing police on time and a portion of the money paid to the latter was also recovered.

He said Habib, along with Rubeena and Ali, visited the city for buying medicines. They ordered food on August 14 and called the health worker in the evening.