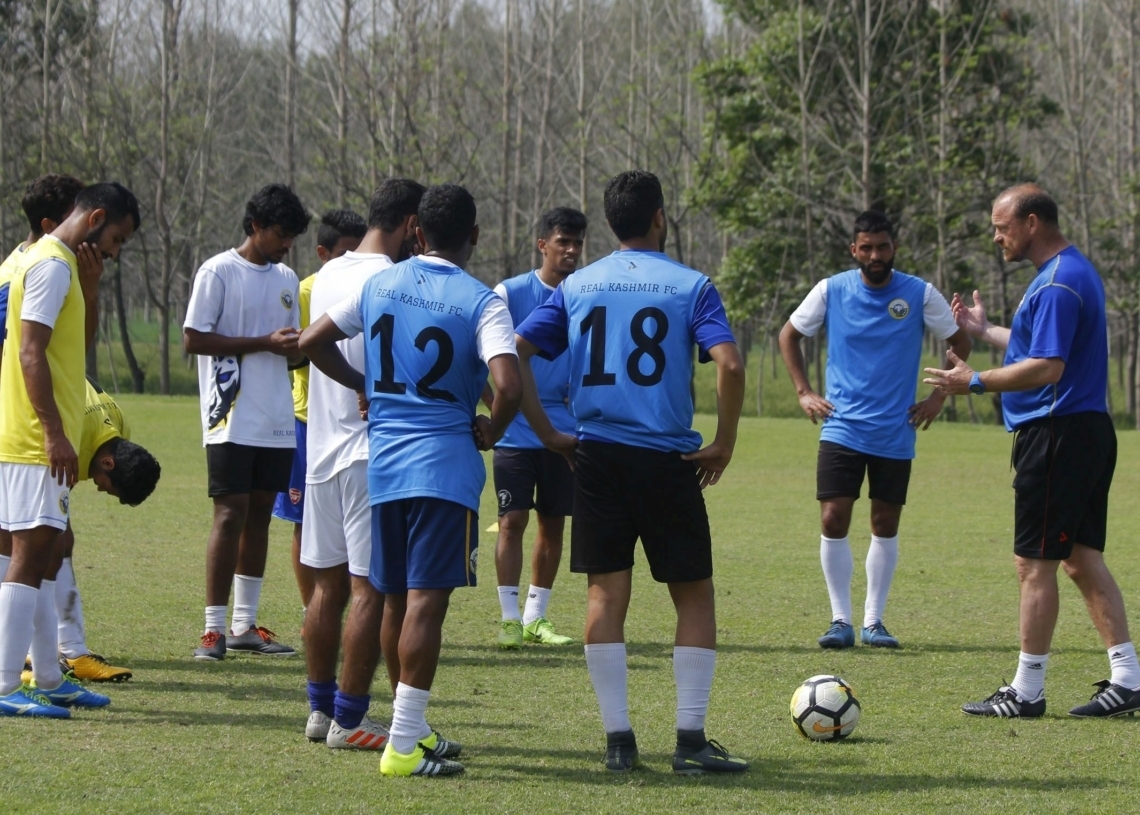 If you are a football buff you would know the famous Spanish league – La Liga.Do you knowone peculiar thing aboutLa Liga teams?Of course, word ‘Real’ prefixed to their names.Most ofthe Spanish clubshave it – ‘Real Madrid’, ‘Real Sociadad’, ‘Real Zaragoza’, ‘Real Betis’ and many more. The prefix ‘Real’ in these cases means ‘Royal’ –anhonorary title. Since Spain has been ruled by monarchs historically, the royal names to the football teams were given to the teams that had received a charter from the King of Spain.The significance of word ‘Real’ is much deepernevertheless.

And herein Kashmir, we have a ‘Real’ also – in Real Kashmir FC,though ‘Real’ for different reasons like

-thefirst club from the state of J&K to lure coaches from Europe – former Scottish internationals David Robertson and Jimmy Lindsay.

-the first club from the state of J&K to have played on foreign soil when the team took on third-tier Scottish League club Stenhousemuir on July 08, 2017 in Scotland.

Nicknamed ‘Leopards of Kashmir’ (the nickname only complements the amblem of the club), Srinagar based Real Kashmir Football Club (RKFC) was founded in April 2016 by Shamim Meraj. A journalist by profession, Shamim played football for the school team and later,went on to representSaint Stephen’s college team in his youth.Not being able to make it to the highest level in the country, for him, the next best thing to be associated with football was to own a club and hence, Real Kashmir FC was born.

According to Shamim, the idea of floating a professional football club crystallizedduring a discussion with friends in 2014, and it took two years to establish it in 2016. Drawing inspiration from his favourite club – Spanish giants Real Madrid FC the club Shamim still follows, he namedhis club Real Kashmir FC. The club is professionally managed by a core group of six people. Headed by the the CEO – Shamim, Showkat Akhtar is the General Manager and Peer Abid- Team Manager, besides the technical team.

The technical team includes the Head Coach David Robertson – former Scottish international having represented his country in EUFA Champions League. David has also played for Scottish premier league club – Glaslow Rangers, and helped it win six consecutive Scottish Premier Division titles during his playing days from 1992-1997. He has also played in the famous English Premier League with Leeds United FC in the season 1997-98. Regarding his coaching experience, David has UEFA Pro License with coaching experience of around eighteen years, having coached the clubs like Leeds United (Youth – 1999), Montrose FC (Scotland), Sereno FC (USA) and Phoenix FC (USA). Having spent 10 years in the United States as coach before, Davidmoved to Kashmir valley in 2016. Sharing his experience of moving from USA, David says, “While I had the offer to choose between much lucrative club in China, a major club in Uganda and Real Kashmir FC (India), I preferred this little club for the reason that it was new – meaning much freedom to work in my own way.”

David is assisted by UEFA ‘B’ coaching license holder Jimmy Lindsay –former Scottish international having played for Motherwell FC, another Premier Division Scottish club. Jimmy has been working on youth football for 40 years now and before joining Real Kashmir FC, he was working with Raiph Rovers FC in Scotland.

Look at the domain of the club. Besides the senior Real Kashmir FC, the club is nurturing talent of the state at Under-18, Under-15, Under-13 and Under-10 levels with eachteam havingthe strength of 30 players.Only in its second year of operation, Real Kashmir FC family has reached the strength of 150 members.And the composition?Diverse beyond imagination.Real Kashmir FC (seniors) includes an engineer, a delivery boy, a car dealer, a factory worker and a businessman. The Real Kashmir FC team is simply camaraderie!

Running on a comparatively small budget, the mission of the club is to grow and be identified as the iconic brand of Kashmir and reflect Kashmiri sporting culture. It is envisioned that 20 years down the line, the club should define Kashmir the way Barcelona FC and Real Madrid FC define their respective cities. And on the way forward, the management is endeavouring to raise finances to achieve its mission and vision.

First year (2016), the year we did not have the league tournament in the state, it was only formative for the club. Real Kashmir FC played its first national competition in September 2016 when the team participated in the 2016 Durand Cup. In 2017, the team got exposure to play international football in Scotland, where a total of four matches were played in five days, much to the learning of the budding footballers. Within a span of one-and-a-half year, Real Kashmir FC has emerged as the second best team in the state Premier Division league tournament this season, only behind the mighty J&K Bank FC. In fact, this season, it is the only team in the Kashmir Premier league to have beaten the table topper J&K Bank. Although the team does not have a major trophy to cherish, yet within a short span of time, it has made a mark on the state football. Individually, the players are charismatic and collectively, the team is capable to beat the best in the country on a day.

Hanan,presently rated among the best mid-fielders of the state, joined Real Kashmir FC in July 2016. Hanan even refused a lucrative offer from a departmental team only to play for Real Kashmir FC. Having played in Brazil for one year with second Division club Marilia FC (Under-19), Hanan style of play is like that of Xavi’s. Asrar reminds me of the pace of likes of Ashley Cole (former England international and Chelsea left back) and my all-time favourite Thierry Henry (former French international and Arsenal winger). And Hammad, this boy plays like Rio Ferdinand (former England international and MU defender).

Culturally, the team is cohesive and highly motivated to make it big. Every team member is part of the team philosophy ‘Nothing is Impossible’ taught by the coach – David, who believes in positive approach in every game, helping the team remain motivated-whatsoever the match circumstances be.The team in ‘blues with yellow sleeves’ has set a benchmark of elegance, both in play and appearance. Given the choice, even my team desired to have football kit like that of ‘Real Kashmir FC’.

Working throughout the year, the Senior Real Kashmir FC plays I-league during the winter season followed by pre-season training and finally participating in the ensuing seasonal league tournament. Starting this season, according to the coach, the team has practised hard in Jammu and Jalandhar for the much awaited I-league (II Division) and the focus lies on to make it to top level tournament of the country – Hero I-league (Super Division). On his experience of working with Real Kashmir FC in a remote place like Kashmir, David has this to say, “It is saddening to see opponents’ excessive use of delay tactics and frequent pretence of injury by the players, only to finish the regular time and take the game to the penalty kicks. By this, the game is reduced to 70 minutes only, which is not good for the development of the players. The focus should be to make the players keep the ball in motion for the whole 90 minutes so that the game is played with the true spirit. The emphasis should not be on winning the trophy hook or crook. Rather, football should be played with true sporting spirit.” Any for grass-root level footballers, David says, “Play as much as you can, even if it is on the streets – that’s the way I played. In the age-group of 7-9 years every player be it from Portugal, Spain or Kashmir, is equally talented. It is only the amount of time he spends with a football and the quality of training that is imparted to him that make Messis, Ronaldos etc. Top class football is all about dedication and the hunger to excel in the game. And play, but at the end of the day, do not forget the school homework.”

For Real Kashmir FC, it is a long way to go before it is reckoned as the iconic brand of Kashmir, but the way the club is planning to move forward, winning I-league is not far enough. At the national level, the club will have to grapple hard to win I-league, but here in Kashmir, it is already roaring football!