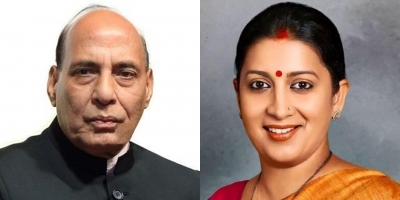 Srinagar, July 24: Union Ministers Rajnath Singh and Smriti Irani will arrive in Jammu and Kashmir on Sunday on a two-day visit.

Officials said the two Ministers are going to participate in the commemoration ceremony of Kargil Vijay Diwas in Jammu and Srinagar cities.

On Monday, Irani is scheduled to flag off a BJP bikers rally at Clock Tower in Lal Chowk, Srinagar.

According to BJP sources, about 700 bikers are likely to participate in the ‘Tiranga Bikers Rally’ which will reach Kargil on Tuesday.

Some senior BJP leaders are also expected to be present during the event which has been organized to commemorate 75 years of India’s independence and Kargil Vijay Diwas that falls on July 26.

Meanwhile, Rajnath Singh will arrive in Jammu on Sunday and will be accompanied by RSS general secretary Dattatreya Hosabale.

The Defence Minister will address a gathering at Gulshan Grounds in Jammu city’s Gandhi Nagar area.