Prior urges Bairstow not to ‘rush back’ from injury 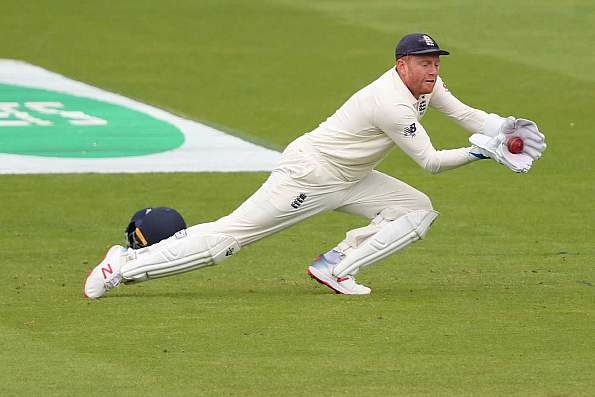 Former England wicketkeeper Matt Prior has urged Jonny Bairstow not to rush back from the injury that forced him out of the first Test against Sri Lanka. Bairstow, England’s first choice wicketkeeper, watched on as his replacement, Surrey’s Ben Foakes, became only the second English wicketkeeper to score a century on Test debut. Prior, back in 2007, was the first.

Bairstow missed the final two of the five ODIs against Sri Lanka in October after going over on his right ankle during a game of football in training. Foakes was called up as the reserve ‘keeper as Bairstow began his recovery. Though he was ruled out of the Test match in Galle, he is making steady progress to be fit for the second game in Kandy, which starts on November 14.

While Bairstow is itching to return to action, not least to reclaim his place behind the stumps which he has worked long and hard to call his own, Prior, who is out in Sri Lanka commentating for talkSPORT 2, believes the 29-year-old should err on the side of caution. He said as much to Bairstow on day one when the pair chatted on the field before the toss.

“The injury he (Bairstow) has, you don’t want to rush back,” said Prior. “Because you can create a lot more hassle. If he’s going to keep, it’s not so much the forward and back and linear movement, it’s going to be the sideways that’s going to be an issue.

“If you try and keep wicket over here, in these conditions, that are very, very physically demanding, half-injured or with a slight injury, you’re going to under-perform and you’re not [just] going to let yourself down but you’re going to let the team down as well.”

If there is one man who can empathise with Bairstow and his desperation to get back playing, it is Prior. In 2014, the veteran of 79 Tests lost his place in the England side to Jos Buttler after desperately trying to overcome the Achilles issue that would eventually see him retire a year later.

He had struggled with the chronic injury through the 2013/14 Ashes and pushed himself to play throughout the 2014 summer. However, after two poor Tests against India, in which his batting and ‘keeping was well below his usual standards, he had to cede defeat. Jos Buttler came in for the third Test and, despite having surgery on his Achilles tendon in 2014, Prior never played again.

“I’ve learned from experience and unfortunately I couldn’t come back from it. There is the bravado of ‘oh I’m playing for my country, they’re going to have to wheel me off’. It doesn’t get you very far. You’d rather go away, give yourself that extra week to come back fully fit so that you can perform. Not only for yourself but for your team, at 100%.”

It looks likely to be the case that not only will Bairstow be fit, but Foakes, after his immaculate 107 helped England to a first innings of 342, will retain the gloves. Foakes did not have to wait long for his first Test dismissal, either, as James Anderson drew an edge from opener Dimuth Karunaratne with the second ball of the Sri Lanka first innings. His second was an immaculate stumping off Adil Rashid to remove opposition skipper Dinesh Chandimal for 33 and reduce the hosts to 115 for five.

However, were England to win this match and believe they have stumbled upon the right balance of side, then it is a possibility that Bairstow may not find a way back in for the second Test, even as a batsman only. That, Prior believes, should not be the case. The Yorkshireman, while possessing a career average of just 37, has averaged 42 since the start of 2016 and has scored all five of his hundreds in that time.

“I think it would be harsh. We’re very quick to forget Jonny has been one of England’s standout performers over the last couple of years. He’s a phenomenal talent and I don’t think we want to look a gift horse in the mouth, quite frankly. Jonny, fully fit, would have played this Test match, probably would have performed well, done well with the gloves and scored runs and we wouldn’t be having this conversation.”

“You want to just remember what a good player Jonny Bairstow is. And if he is fully fit, then he should come back int the team, for me. Whether he keeps wicket, that’s a whole other conversation. Who knows. That will be based on the balance of the team, which allrounders, you’ve got to look at the wicket. Kandy apparently is going to go through a bit more: does Broad come back in? You’ve got to look at the balance of the team and see how everyone fits it.”

While England are spoiled for wicketkeeping riches with Bairstow, Buttler and now Foakes – “They’re all international standard wicketkeepers,” believes Prior – it is a situation they need to manage well. Foakes, particularly up to the stumps, is the superior operator, which is vital in Asian conditions.

But alternating between them could cause problems. And the first of those will be how to ensure all parties are treated with due respect. Another issue, Prior feels, is that the England management now have another selection matter to tend to when there are other areas, such as the top-order, to address.

“Ben Foakes, to walk out 100-5 and play in foreign conditions in Sri Lanka, with all the challenges that come with that, is just a huge, huge effort. What we don’t want to do is create an issue where there actually isn’t one, just because Ben Foakes has not come in and done really well.

“That’s where I was slightly surprised. There are other areas in this England cricket team that really need work on and now we’re having a discussion over the one area that was actually pretty solid in Buttler and Bairstow. I think our focus should be on our top four and making sure they start performing and getting some runs on the board.

“We’re never going to consistently win Test matches and get this England Test team to the level that we want to be at if we’re 20-2 every single innings. The other issues need to be focussed on and this issue papers over the cracks.”