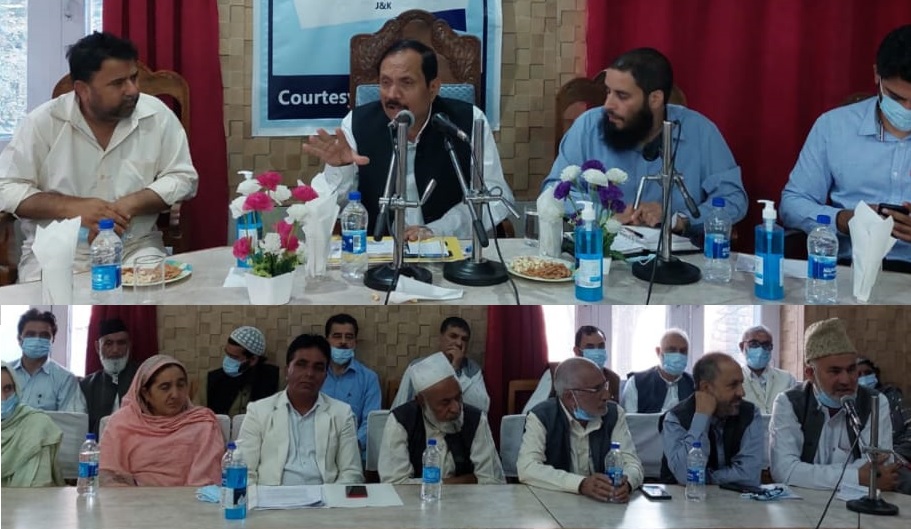 KARNAH, SEP 04: On the second day of his visit to border district Kupwara, Advisor to Lieutenant Governor, Rajeev Rai Bhatnagar today held a detailed interaction with DDC member, BDC Chairpersons, Sarpanches, Panches and other public representatives of Sub-division Karnah and took stock of their issues and problems related to the development of the area.

While interacting with the PRI representatives, Advisor Bhatnagar said that the present LG’s Administration is giving very focused attention to remotest areas of Jammu and Kashmir and constant interactions are being held with the public through Block Diwas programmes as well as public grievance redressal camps organised at Panchayat as well as block levels.

Appreciating the work done by the PRI representatives in their respective areas, Advisor Bhatnagar asked them to work with full commitment and dedication as they are the cornerstones of the development of entire Jammu and Kashmir.

During the interaction, the PRI representatives also raised several issues and grievances pertaining to their areas before the Advisor and demanded early redressal of the same.

The Advisor assured them that all of their genuine issues and problems will be resolved on priority basis.

At Teetwal, various public delegations and PRI representatives also called on Advisor Bhatnagar and raised several issues pertaining to their area before the Advisor. They demanded advanced snow clearance machines for the area besides timely macdamization of roads, among others.

While interacting with the public delegations, Advisor Bhatnagar said that the present LG’s Administration is reaching out to the doors of common masses of far flung areas to assess their needs and aspirations. The Advisor assured them that all of their genuine demands will be addressed on priority.

The meeting was attended by SDM, Karnah, Dr. Gulzar Ahmad Rather; senior officers of various departments and other concerned officials.

During the meeting, Advisor Bhatnagar impressed upon the officers to work with full commitment and dedication as they are the main contributors to the development of this area. He asked the officers to maintain constant touch with the people of this area owing to its low reach.

While reviewing pace and progress on several ongoing works across the Sub-division, Advisor Bhatnagar delved upon the officers to regular monitor these works for its timely completion as the area has very short period for carrying construction works. He further asked them to keep advance stock of all the basic necessities like food grains, oil, among others, as the area remains cut off for maximum time during the winters.