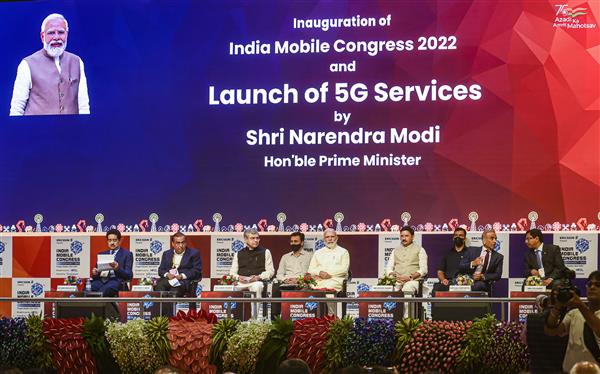 New Delhi, Oct 1: Prime Minister Narendra Modi on Saturday launched 5G services in the country, saying it was a “historic day for 21st century India” and added that the technology will revolutionize the country’s telecom sector.

Launching the service at the four-day India Mobile Congress (IMC) 2022 at Pragati Maidan in the national capital, Modi spoke about the benefits of 5G in India and how the service will help the country’s technological revolution.

He also spoke about key pillars that will support the Digital India movement, including the need for affordable technology and a widespread network.

The Prime Minister stressed on manufacturing of smartphones in India and said how it will ensure a reduction in device costs.

“Till 2014 we used to import 100 percent of our mobile phones. That’s why we decided to become ‘atmanirbhar’ in this particular area. In India, we now have 200 mobile phone manufacturing units now,” he said.

Modi also mentioned that India had 25 crore internet connections back in 2014, a number which has now increased to 85 crores.

More internet users are coming on board from rural areas, he said, adding that 5G will play a key role in how users new and old will benefit from the internet and its possibilities.

Modi said that at the time of 2G, 3G, and 4G, India was dependent on other nations for technology, but with 5G, the country has created a new history.

“With 5G, India is setting a global standard in telecom technology for the first time.”

The Prime Minister went on to say that with the increase in digital connectivity, the country has witnessed a multiplier effect.

“We have taken digital from the elite to the grassroots in India, and this has led to innovation in the country.”

Earlier, the Prime Minister virtually interacted with metro workers, who were present inside a tunnel, via 5G technology.

5G will be launched in select cities on Saturday and it will progressively cover the entire country over the next couple of years.

The cumulative economic impact of 5G on India is estimated to reach $450 billion by 2035.