Photo of Ukrainian woman clutching assault rifle in one hand, her child in the other moves Twitter to tears 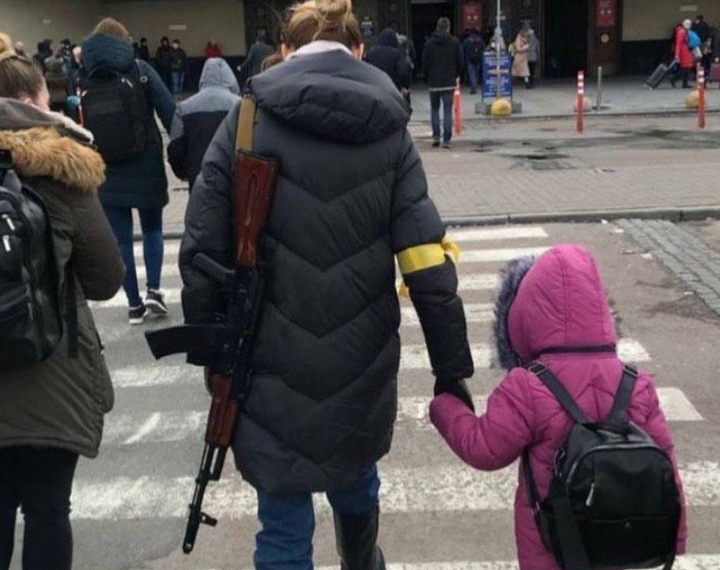 Among the many gut-wrenching images to emerge out of Ukraine amid Russia’s ongoing onslaught is that of a woman clutching her child’s hand in one hand and an assault rifle in the other.

As Kremlin’s war rhetoric turns fiercer and thousands of Ukrainian civilians flee to safety amid continued Russian shelling and bombing, videos and photos spill out that tells you stories of bravery, fear, and horror—women and children being taught how to use AK 47s in the face of the growing threat, people flooding under a broken bridge to escape the invasion, families bidding tearful goodbyes to one another as the war tears them apart.

Ukraine’s Centre for Strategic Communications and Information Security shared one such photo.

“Every Ukrainian mother deserves to be called a Wonder Woman,” the Centre for Strategic Communications and Information Security’s tweet read. The woman in the photo is surrounded by several civilians, all of them presumably trying to flee the Russian invasion.

The photo has moved several people on Twitter to tears.

“That honestly brings a tear to my eye,” said a user in response to the photo. “It’s hard to even phathom (sic) my wife doing this with my daughter and how that would affect them in the future, hoping there is one. Even when we were in Seoul during the N.Korea Crisis 20010-2014 and thought war could happen… So sad.”