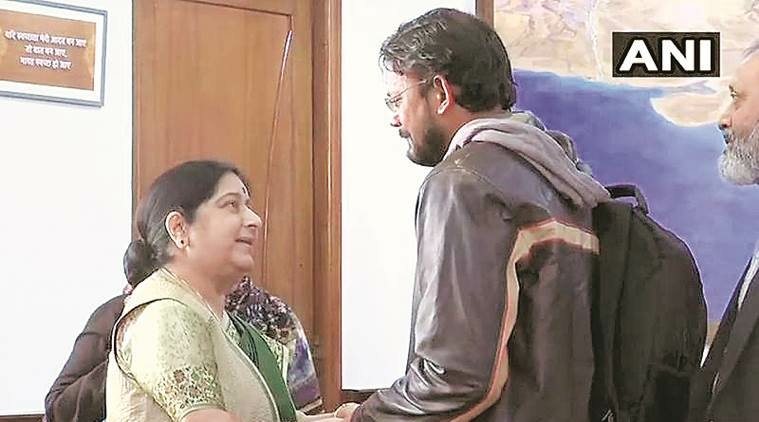 New Delhi: Hamid Nehal Ansari, who returned to India after being held in a Pakistani jail for illegally crossing over from Afghanistan six years ago, told External Affairs Minister Sushma Swaraj that he was physically tortured by Pakistan’s intelligence agencies and that his left eye was damaged sources said.

Ansari, who met Swaraj in Delhi Wednesday along with his family, also said that he was treated by doctors in Pakistan. The 33-year-old recalled that he was kept in solitary confinement initially after he was arrested and interrogated by Pakistani authorities, sources said.

Regretting his decision to leave his aged parents, Ansari told Swaraj that he wanted to rebuild his life, get a job and possibly get married. “The meeting was very emotional, and the mother was very thankful to the Minister,” sources said.

In a video clip of the meeting released by the Ministry of External Affairs, Ansari’s mother Fauzia is heard telling Swaraj: “Mera Bharat mahan, meri madam mahan, sab madam ne hi kiya hai (My India is great, my madam is great. Madam did everything).”

Mumbai-based Ansari crossed over to the Indian side at the Attari-Wagah border Tuesday after completing his sentence in Peshawar’s central jail on charges of espionage. After reaching Delhi, he said: “I feel really good coming back home. I am very emotional right now.”

Ansari had allegedly entered Pakistan on November 12, 2012, from Afghanistan to meet a woman whom he had befriended on social media. In 2015, he was handed a three-year sentence by a military court for possessing a fake Pakistani identity card.

The only contact he had with his family during this period was a phone call for which his parents were brought to the Pakistan High Commission in Delhi, sources said.

Ansari’s jail term ended on December 15, and he was repatriated after the Peshawar High Court Thursday gave the Pakistan government a month’s deadline to complete the process.