Novel battery-powered, flexible heating patches can be stitched to clothes 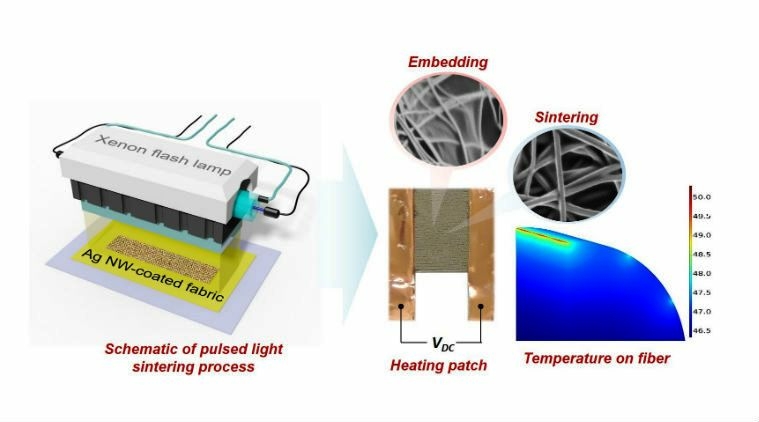 Scientists – including one of Indian origin – have developed flexible, battery-powered heating patches that can be sewn into clothes and keep the body warm. The researchers from Rutgers University and Oregon State University in the US found a cost-effective way to create the patches by using intense pulses of light to fuse tiny silver wires with polyester.

Their heating performance is nearly 70 per cent higher than similar patches created by other researchers, according to the study published in the journal Scientific Reports. “This is important in the built environment, where we waste lots of energy by heating buildings – instead of selectively heating the human body,” said Rajiv Malhotra, an assistant professor at Rutgers University-New Brunswick. It is estimated that 47 per cent of global energy is used for indoor heating, and 42 per cent of that energy is wasted to heat empty space and objects instead of people, the study notes.

Solving the global energy crisis – a major contributor to global warming – would require a sharp reduction in energy for indoor heating. Personal thermal management, which focuses on heating the human body as needed, is an emerging potential solution. Such patches may also someday help warm anyone who works or plays outdoors, researchers said. They created highly efficient, flexible, durable and inexpensive heating patches by using “intense pulsed-light sintering” to fuse silver nanowires – thousands of times thinner than a human hair – to polyester fibers, using pulses of high-energy light.

Next steps include seeing if this method can be used to create other smart fabrics, including patch-based sensors and circuits. The engineers also want to determine how many patches would be needed and where they should be placed on people to keep them comfortable while reducing indoor energy consumption.