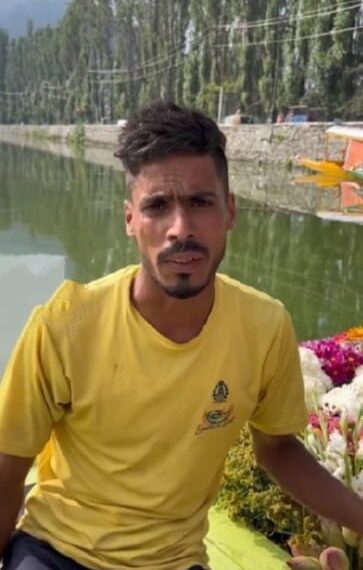 Srinagar: One can come across quite a few flower sellers at the famed tourist spot Dal Lake but there is just one ‘Mr Marvellous Flower Man’, who is very popular among the tourists and bloggers.

Ali has earned this nickname because of his unique salesman skills and good knowledge of flowers and seeds. When he deals with foreigners, he speaks English with a strong accent. He can also speak a bit of French and other European languages and when he sees a domestic tourist, he uses names of Bollywood films, songs, and dialogues to sell flowers.

Ali says he got his nickname from a German tourist, who was impressed with his skills.

“We have been selling flowers on Dal Lake for generations. My grandfather and father used to sell flowers and I too have been selling for the past seven years. When a German tourist saw me selling flowers, he was impressed by my skills and named me ‘Mr. Marvelous Flower Man’. I sell different flower and seed varieties like lotus, bluebells, cosmos, Persian bluebells, daisies, jasmine, marigold, etc. We also have a garden at Nigeen Lake where we grow different flowers,” said Ali.

He claimed that some of the dried flower varieties could last up to one year and tourists from all over the world were his customers.

“Most flowers have a life of 10 to 20 days but some varieties can stay up to one year after drying up. Once these bluebells are dried, they look like artificial flowers and will last up to six months. Lavender too can be dried and it can be then kept in cupboards. It will give your clothes a great smell,” said Ali.

“I also sell seeds and saplings. I have rare varieties like the blue rose that costs Rs. 1800. The costliest variety that I have is the maple Bonsai tree that costs Rs. 25000,” he added.

Well-known food blogger Omar Rather of ‘KashmirFoodGram’ said he was ‘forced’ to feature Ali because of his unique salesman skills.

“I usually blog about food only and have not featured a flower seller before. However, Ali’s unique salesman skills forced me to feature him. He is one of a kind and speaks English with a heavy accent. He has also picked up a bit of French and other European languages from tourists and impresses foreigners with his oration. If a flower has a name of French origin, he pronounces it in a French accent,” he said. “When he speaks Hindi, you will be surprised to see how he uses names of films and songs in his speech for example ‘Lily don’t be silly’, ‘Kashmir in Kali’ and others having names of flowers, buds, etc.”