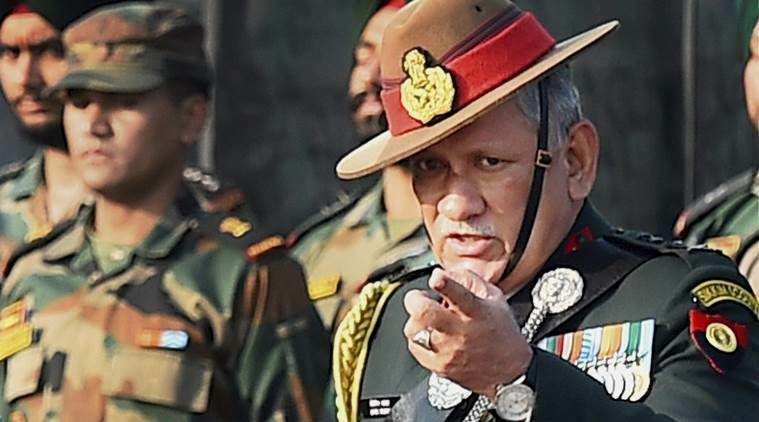 New Delhi : Prime Minister Narendra Modi and Army Chief General Bipin Rawat during the ceremony for pays tribute to security personnel who lost their lives in encounters with terrorists in J&K on tuesday, at AFS Palam in New Delhi on Wednesday. PTI Photo by Kamal Singh(PTI2_15_2017_000192A)

Here on, end-September will likely figure as the annual culmination of the India-Pakistan summer campaign over Kashmir. Thus far the arena has been the General Assembly’s chamber in New York with the right of reply being deployed by both sides. In the latest episode, India called-off a meeting – though one not amounting to talks or a resumption of the peace process – between the two foreign ministers that was to be held in New York.

As India heads into its fifty-year Reich predicted by Amit Shah, the context back home to the annual joust in New York will be provided by the observance of the Parv Parakram, celebration of the anniversary of the ‘surgical strikes’.

There being no meetings left to call off in case needed, the stage is set for the next crisis. An expert relying on notes taken on a field trip to the region rules in limited war.

Apprehending as much, the Indian Army Chief is set on a military reforms agenda. He believes the Indian army is configured for fighting ‘previous wars’. Army commanders at this autumn’s conference are to sign off on a restructuring agenda to make the army’s cold start doctrine implementable.

The Army Chief let on that India has options up its sleeve other than surgical strikes. He wishes to reprise surgical strikes and inflict like pain on Pakistan, but without the brutality that attends Pakistani provocations.

This implies a perforation of the sub conventional-conventional divide in an up-gunned variant of surgical strikes by conventional means. The aim is to rekindle escalation dominance.

The conventional advantage being with India, Pakistan for its part, has sought to undercut this by introducing tactical nuclear weapons at the conventional level. It has obscured the divide between the two levels, conventional and nuclear.

Though having deterrence benefits, the underside of such exertion is an impetus to brinkmanship. Assuming escalation dominance, a side may be more willing to go to the brink and court conflict in crisis.

The two sides not talking to each other, there is currently no buffer. This means there is one step less between trigger events and crisis.

Earlier, the two sides had put their eggs into one basket, that of contacts between the two national security advisers. The Indian side having a security czar in Ajit Doval, the Pakistani side had reciprocated with appointing a military man as his counterpart. The two reportedly met discreetly some six times over the past four years.

The Pakistani national security adviser having resigned on Nawaz Sharif being forced out of office, even this link no longer exists. The Imran Khan administration is disinclined to recreate the appointment, merging the office with is foreign ministry.

It is apparent then that political distancing and military preparedness are dangerously coextensive.

As India heads into elections, there is a political necessity to keep the India-Pakistan pot simmering. This can enable the ruling party to use the ongoing face-off for political dividend when needed. With the Rafale episode joining demonetization, the general services tax and jobless growth kicking in together, political compulsions may require trotting out the Pakistani bogeyman.

The usual autumnal reports of some 300 militants in terror launch pads waiting to infiltrate prior to snows setting in are already being put out. The local elections within the Valley can provide the tinder. The upcoming tenth anniversary of Mumbai 26/11 serves as a difficult juncture. If the death of three special police officers and mutilation of a border guard’s body caused a pause in meetings between the two countries, no recourse is left but retaliatory violence at the next provocation.

Pakistan for its part would not be averse. It would like to get back at India, viewing India’s hard-to-get stance as a spurning of its hand outstretched over the past year. Counter-intuitively, it may like to smoothen the path to Prime Minister Narendra Modi’s continuing in power, knowing that a crisis would be useful politically for him. PM Modi in power is only superficially bad news, since his hardline is useful for the Pakistan army’s lease on power in Pakistan.

Political portents indicate a troubled relationship in the run up to Indian elections. Putting in place shock absorbers is the only practical bet for the interim. Sushma Swaraj’s formula that meetings are only to discuss terror can prove a handy band aid.

Equally notable are the levels of insecurity at the fag-end of the government’s tenure. Its posturing on national security ever since Mr. Modi’s trip to Rewari inaugurating his election campaign in 2013, that was backed by cheerleaders on Delhi’s strategic circuit, stands exposed.

The offensive-defensive dialectic is the sine-qua-non of strategy. So far, India’s military developments have only driven Pakistan further down the nuclear route. The last round of conventional change India instituted – its cold start doctrine – resulted in tactical nuclear weapons appearing on the subcontinent. The current day thrust for restructuring cannot but have like innovative response, and therefore is not quite the route to security.

The shift to cold start doctrine and its implementation phase was in the context of improved India-Pakistan atmospherics. This round of restructuring requires similar buffering. Instead, the current trajectory of India’s Pakistan policy worsens Indian security.

Four years into the hardline policy, continuing insecurity must be laid at its door. Consequently, security considerations must figure in voter considerations ahead.