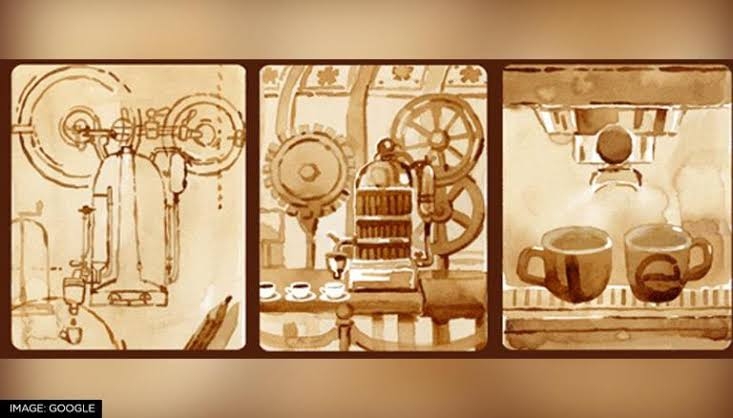 Coffee lovers have a reason to rejoice as Google is celebrating the 171st birth anniversary of inventor Angelo Moriondo, considered the godfather of espresso machines with an artistic doodle.

Moriondo was credited for patenting the earliest known espresso machine in 1884.

Google doodle, which has been created by Olivia When, features a GIF of the first known espresso machine and has been painted with coffee.

Born on June 6, 1851, in Turin, Italy, Angelo Moriondo belonged to a family of entrepreneurs “who never stopped brewing new ideas or projects”, Google said in a note on the extraordinary inventor. Moriondo’s grandfather founded a liquor production company which was then managed by his father. Moriondo also built the popular chocolate company, “Moriondo and Gariglio” with his brother and cousin.

Coffee was at its peak in popularity in Italy during the innovator’s time. But coffee lovers faced extreme inconvenience as they had to spend a lot of time waiting for the coffee to brew.

“Once upon a time, in 19th century Italy, coffee was the hottest item around. Unfortunately, brewing methods required customers to wait over five minutes to get their drink. Enter Angelo Moriondo, the man who patented the first known espresso machine,” Google’s note said.

Moriondo’s espresso machine was shown at the General Expo of Turin in 1884 and was awarded the bronze medal.

Moriondo’s machine which allayed the difficulties faced by coffee drinkers consisted of a large boiler that pushed hot water through a bed of coffee grounds and a second boiler that produced steam that would flash the bed of coffee and complete the brew. The invention was then confirmed by an international patent after being registered in Paris on October 23, 1885.