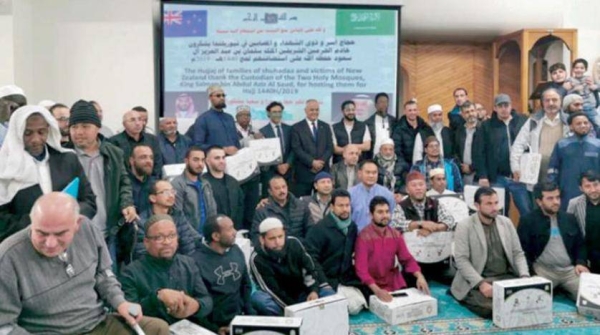 Arabic daily `Asharq Al-Awsat’ reported that a group of 60 pilgrims includes relatives of victims of the Christchurch mosque terrorist attack in New Zealand in 2019.

On March 15, 2019, at least 51 people were killed and 49 seriously injured in mass shootings at two mosques in New Zealand’s Christchurch.

During the Haj 2019, King Salman hosted the 200 pilgrims— families of the victims as well as those who were wounded in the terror attacks.

However, some of those who were hospitalized with injuries or a few family members of the deceased were not able to make the pilgrimage to Makkah.

According to the Saudi ambassador to New Zealand Abdul Rahman Al Suhaibani, this is the last group of pilgrims from New Zealand to benefit from the King’s initiative. “The list of the selected candidates for Hajj was prepared in coordination and cooperation between the embassy and the Ministry of Hajj and Umrah.”

Hosting the families during the Haj season is a part of Saudi Arabia’s efforts to “confront and defeat terrorism” in all its forms.

The COVID-19 pandemic caused a major obstacle to the pilgrimage in the past two seasons, and Saudi Arabia allowed only 10,000 people from within the Kingdom to perform the ritual in 2020, in 2021 the number was raised to 60,000 fully vaccinated and selected by lottery.

The Saudi authorities announced that one million Muslims including 850,000 performed Hajj for the current year, most of them from outside the Kingdom, while their number in the last Haj season before COVID-19 was about 2.5 million Muslims from all over the world.