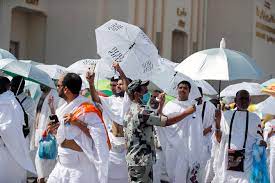 Riyadh: Saudi Arabia (KSA) has asked all overseas Hajis to leave for their countries by August 13

According to the Arabic daily Okaz, the Kingdom’s Ministry of Haj and Umrah has asked the companies responsible for the pilgrims to adhere to the departure schedules.

The companies must also ensure that travel procedures for Haj pilgrims are completed to facilitate the departure of their last group.

The ministry indicated that all the Haj pilgrims remaining inside the Kingdom must verify the details of their transportation and residency from the companies that organized their trips.

Nearly 900,000 pilgrims, most of them from outside Saudi Arabia, performed the Haj this year after the kingdom eased restrictions against the COVID-19 pandemic that prompted authorities to limit rituals to local pilgrims for two years.