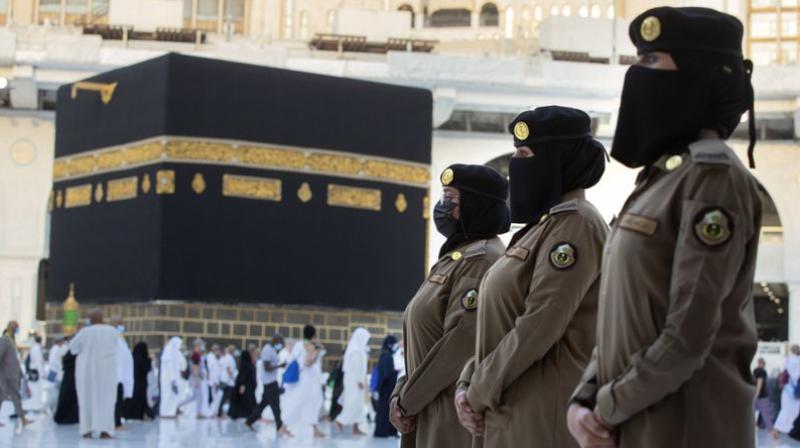 Arab News reported that following last year’s government announcement that women could join the military service, female officers have been able to join their male colleagues in policing the holy city for the Muslim festival.

Afnan Abu Hussein, who was among the first batch of women cadets to graduate from police service training, told Al-Ekhbariya TV: “This is a source of pride and happiness for us. Hajj is a very busy season for us, unlike normal days.”

Hajj began on Wednesday as pilgrims began their journey from the Grand Mosque in Makkah amid strict safety rules.

“Each group of pilgrims has a leader to facilitate and control their movement to ensure social distancing,” said Sari Asiri, director-general of Hajj and Umrah affairs at the Ministry of Health.

A massive security blanket has been thrown around holy sites to ensure a peaceful and incident-free Haj this year.

In a speech, Lt. Gen. Mohammed bin Abdullah Al-Basami, the director of public security and head of the Hajj security committee, said security forces would be operating in Makkah, Madinah, other holy sites, ports, and on all roads leading to Hajj areas.

Prince Abdulaziz saw personnel demonstrate how they would deal with several possible security scenarios and watched a parade of special and armored vehicles, and airborne support.

Meanwhile, officials have unveiled A series of special exhibitions and enrichment initiatives that will take place at the holy sites during Hajj to provide pilgrims with enhanced spiritual and cultural experiences as part of an unforgettable Hajj journey.

The program was launched by the Royal Commission for Makkah City and Holy Sites, represented by the Kidana Development Company.

In a message posted on its official Twitter account, Kidana said: “To achieve the #Saudi_Vision_2030 through enriching the religious journey, the cultural experience and caring for the #Pilgrims, #Kidana launches seven initiatives to enrich the experience of the pilgrims with the participation of governmental and private sectors.”

The seven events include three exhibitions related to the holy sites and four religious and cultural initiatives.

The Covenant Exhibition in Arafat will introduce pilgrims to the most prominent characteristics of Makkah and its residents. The Water Story Exhibition, also in the Arafat area, highlights the history of water provision during Hajj and the honor of the mission. It is presented in cooperation with the Al-Zamazemah Company, which is responsible for supplying and distributing water at the holy sites during Hajj and Umrah, and throughout the year.

The third exhibition, in Mina, focuses on the Kiswa, the cloth that covers the Kaaba. It will tell the history of the Kiswa, explain how it is made, and highlight the efforts made by the Kingdom to provide and develop all Kaaba-related services. The exhibition is being organized by the General Presidency for the Affairs of the Two Holy Mosques, the House of Islamic Arts, and The Custodian of the Two Holy Mosques Institute for Hajj and Umrah Research.

The other four initiatives cover various cultural, Islamic, and social topics, and will be presented in a variety of locations in collaboration with several specialist associations.

Coffee represents a strong element of Saudi culture that is closely linked to the identity and traditions of the country. In cooperation with the Ministry of Culture’s Year of Saudi Coffee initiative, coffee will be served to pilgrims in Mina. As part of the Hajj initiative, the pilgrims will also have a chance to learn about the distinctive characteristics of Saudi coffee, along with ways of preparing and serving it.

The second initiative, which will take place beside the Aqaba Hill Mosque in collaboration with the Saudi Tour Guides Association, aims to share the history of the location and the events that took place there.

The Kidana Development Company is organizing an initiative called A Photo and a Memory to help pilgrims remember and treasure the highlights of their Hajj experience, as part of which visitors will be presented with gifts.

Finally, the Aroma of the Holy Sites, which will take place at Mina during Eid Al-Adha, is a unique initiative designed to capture and share the essence of the holy sites.