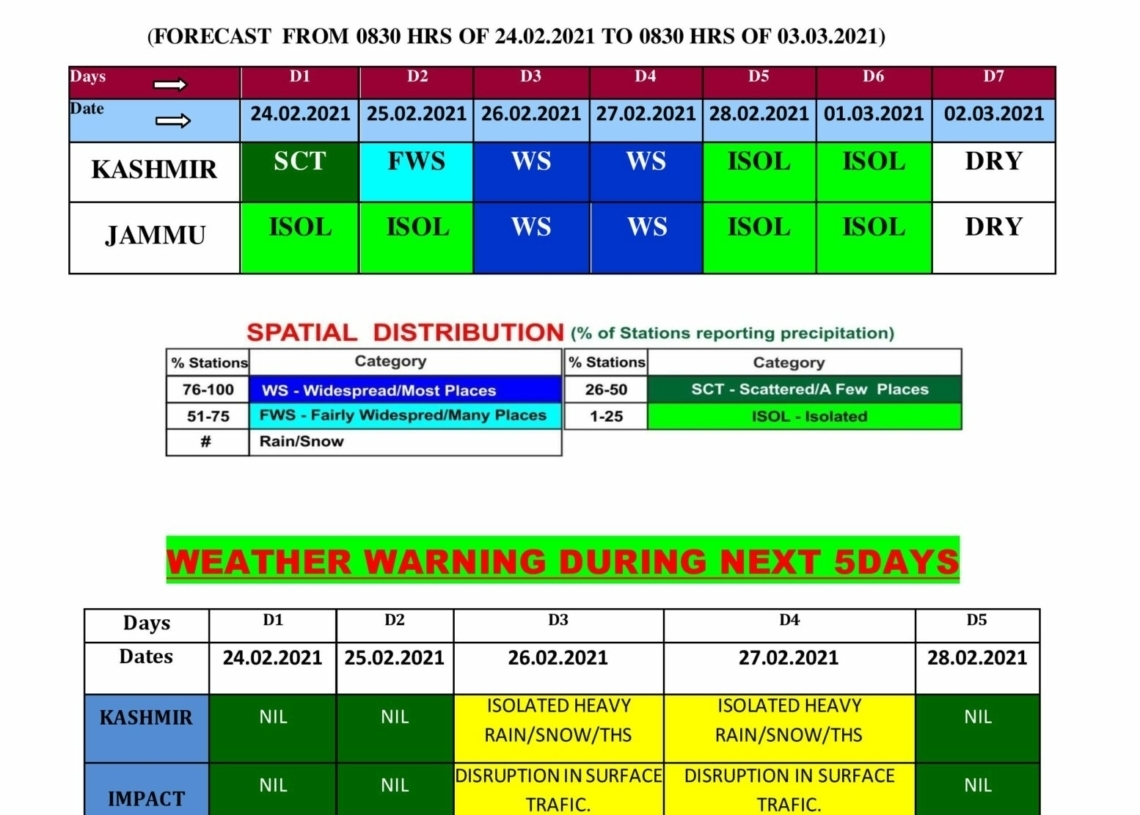 Srinagar: The weatherman on Wednesday said that there was no forecast for any major rain or snow in J&K and Ladakh even as the morning weather report flashed yellow warnings for February 26-27.

“Light to moderate rain /snow is likely at scattered places of J&K and Ladakh during 25-26th.

There’s no forecast of any major rain or snow in both J&K and Ladakh,” he added.
However, the weather department continued with the “yellow warning” for “isolated heavy rains/snow/thundershowers” in Kashmir as well as Jammu divisions on February 26 and 27.

There are four types colour codes signifying the level of caution: green which means no action, yellow—situation to be watched, amber –government agencies need to be prepared for severe weather and red –action needed by the agencies.

The MeT office has said that weather system may cause disruptions of flights and slippery road conditions Banihal-Ramban, Zojila, Mugal road etc during the two days.

Meanwhile, a meteorological department official told GNS that Srinagar recorded a low of 4.2°C against 6.6°C on the previous night.

The temperature was 3.3 degrees Celsius above the normal for this time of the year in Srinagar where 0.2mm of rainfall was recorded in the last 24 hours till 0830 hours, the official said.

Qazigund, the gateway town of J&K, recorded a low of 2.2°C against 4.0°C on the previous night while the mercury settled at 0.1°C at Pahalgam against minus 3.2°C on the earlier night.

Kokernag, also in south Kashmir, recorded a low of 1.5°C against 3.4°C on the previous night.

The minimum temperature settled at 3.8°C in Kupwara against 6.2°C on the previous night even as the northern Kashmir district recorded rainfall of 2.6mm during the time, he said.

Gulmarg, the world-famous skiing resort, recorded a low of 0.0°C, same as on the earlier night and recorded fresh rain/snow of 1.8mm during the time, the official said. (GNS)