Kajuwala to Nawalgarhi: Over 1.75 lakh sheep imported for Bakr Eid in Kashmir 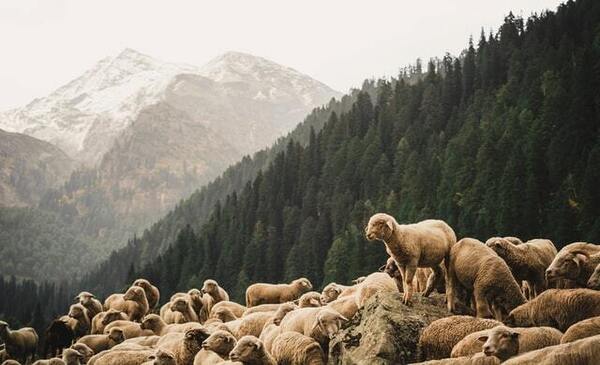 Srinagar:  More than 1,75,000 sacrificial animals have been imported to Kashmir in the last one week.

“Usually the demand for the sacrificial animal increases a week before the festival. So far imported 800 trucks with sheep have arrived in Kashmir. Each truck has the capacity to accommodate 150-170 sheep. It means that 1,75,000 sheep have been brought to Kashmir so far,” said Mehraj -ud-din  Ganie  General Secretary of All Kashmir Wholesale Mutton Dealers Association.

This time, buyers are looking for new breeds to make animal sacrifices memorable. From Marwari to Kajuwala and from Seekhar to Nawalgarhi, new sheep breeds have made their way to Kashmir this Eid season.

“Marwari is an average sheep breed. Some like to sacrifice Kajuwala, which is a bit costlier. Some people like to spend as much as money on the sacrificial animal to earn more rewards,” said Abdul Quyoom, a seller.

Unlike previous Eids, the mutton dealers have explored more markets to meet the demand for the festival.

“Some like to sacrifice a healthy and good-looking sheep. Few like normal ones. So we have brought sheep varieties including  Marwari, Jaisalmer, Nawalgarhi, Kajuwala, and Seekhar to meet the demands and choices of our customers. These varieties have been brought from markets of New Delhi, Rajasthan, Mewar, Amritsar, Ambala, and Gujrat,” said Ganie

Dealers said the demand for the sheep is likely to soar in the coming days. ”If we feel that demand is soaring, we might import some more trucks of sheep in the coming days. Various mandis of Kashmir including Srinagar’s Edgar and then in other districts have abundant sheep available for Eid,” Ganie said.

He said people in Srinagar prefer Sheep for sacrifice.  Apart from sheep, camels, and goats too have been imported by the dealers from various markets of India.

An official from the sheep husbandry department said that almost 50 percent of the demand will be met locally by the bakarwals and farmers in Kashmir.

“Bakarwals have already moved towards plains and they are selling sheep in various markets of Kashmir. Similarly, we have farmers who have set up their units and cater to the demand for Eid,” he said.