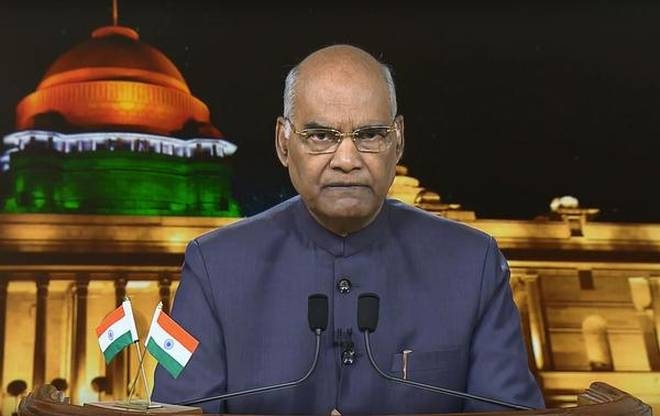 New Delhi, Dec 19: President’s rule has been imposed in Jammu and Kashmir, the first time since 1996, after Ram Nath Kovind signed a proclamation ordering imposition of central rule in the state from midnight.

The Governor’s rule ended on December 19.The union cabinet headed by Prime Minister Narendra Modi took the decision on Monday after Jammu and Kashmir Governor Satya Pal Malik sent a report recommending imposition of President’s rule in the state.

After the proclamation, the powers of the Legislature of the state shall be exercisable by or under the authority of Parliament.

Since the state has a separate Constitution, in such cases, six months of governor’s rule is compulsory under Article 92 of the Jammu and Kashmir Constitution, under which all the legislature powers are vested with the governor.

The governor on November 21 dissolved the 87-member state assembly after the PDP, supported by the Congress and their arch rivals National Conference, had staked claim to form the government.

Simultaneously, the two-member People’s Conference led by Sajjad Lone had also staked claim to form a government with 25 members of the BJP and other 18 unknown members.

The governor had dissolved the assembly citing horse trading and lack of stability to form a government as the reasons.

The state has been under central rule eight times, and moved from Governor’s rule to President’s Rule (after six months) on two of those occasions.

This will be the third time.

Until March 30, 1965, the state did not have a Governor or Chief Minister; it had a Sadre Riyasat (President of the State) and a Prime Minister.

In other states, the Centre invokes Article 356 to impose President’s Rule; in J&K, under Section 92 of the J&K Constitution, the Governor can rule for six months with a set of powers, the only requirement being the President’s consent.

Governor’s Rule was imposed for the first time on March 26, 1977, when the Congress withdrew support to Abdullah, the then Chief Minister.

The Congress wanted to move a no-confidence motion but Abdullah recommended dissolution of the Assembly and fresh elections; then Governor L K Jha put the state under Governor’s rule. This lasted for 105 days until Abdullah was re-elected.

The first spell of President’s rule was in 1986. Abdullah’s son-in-law Ghulam Mohammad Shah split the National Conference legislature party, leading to the dismissal of then CM Farooq Abdullah, and became CM of a Congress-supported NC rebel government.

This was Jagmohan’s first term as Governor, sent by the Congress government in New Delhi. Facing a public backlash, the Congress eventually withdrew its support, leading to Governor’s rule, followed by President’s rule.

The longest spell of central rule, from 1990, after breakdown of the state machinery led to the resignation of CM Farooq Abdullah. New Delhi sent Jagmohan as Governor again.

President’s Rule was repeatedly extended until October 1996. After which the Governor rule was imposed several times but could not extend beyond six-months.

Following 2002 assembly poll outcome, governor’s rule led by G C Saxena was imposed in the state from October 18, 2002 to November 2, after Farooq Abdullah refused to continue as caretaker chief minister of the state as PDP and Congress took 15 days in cobbling up numbers to form the government.

The governor rule led by N N Vohra was again imposed from July 11, 2008 to January 5, 2009 following the fall of Ghulam Nabi Azad-led coalition government. Azad resigned as chief minister of Jammu and Kashmir without facing a confidence vote on the floor of the assembly.

However, the elected government was put in place before the six-month period of governor ended.

Six months of governor’s rule is compulsory under Article 92 of the Jammu and Kashmir Constitution.

All the legislature powers are vested with the governor during this period. The governor has to dissolve the Legislative Assembly after the tenure of six months is over and the state will directly come under the President’s rule for following six months during which elections have to be declared in the state.

In case the elections are not declared, the President’s rule can be extended by another six months.

Since the state does not come under President’s rule under Article 356 of the Indian Constitution and is promulgated under Section 92 of the state Constitution, all the decisions taken thereof shall have a concurrence of the president under Article 74 (1)(i) under which council of ministers with the Prime Minister at the head will aid and advise the President.