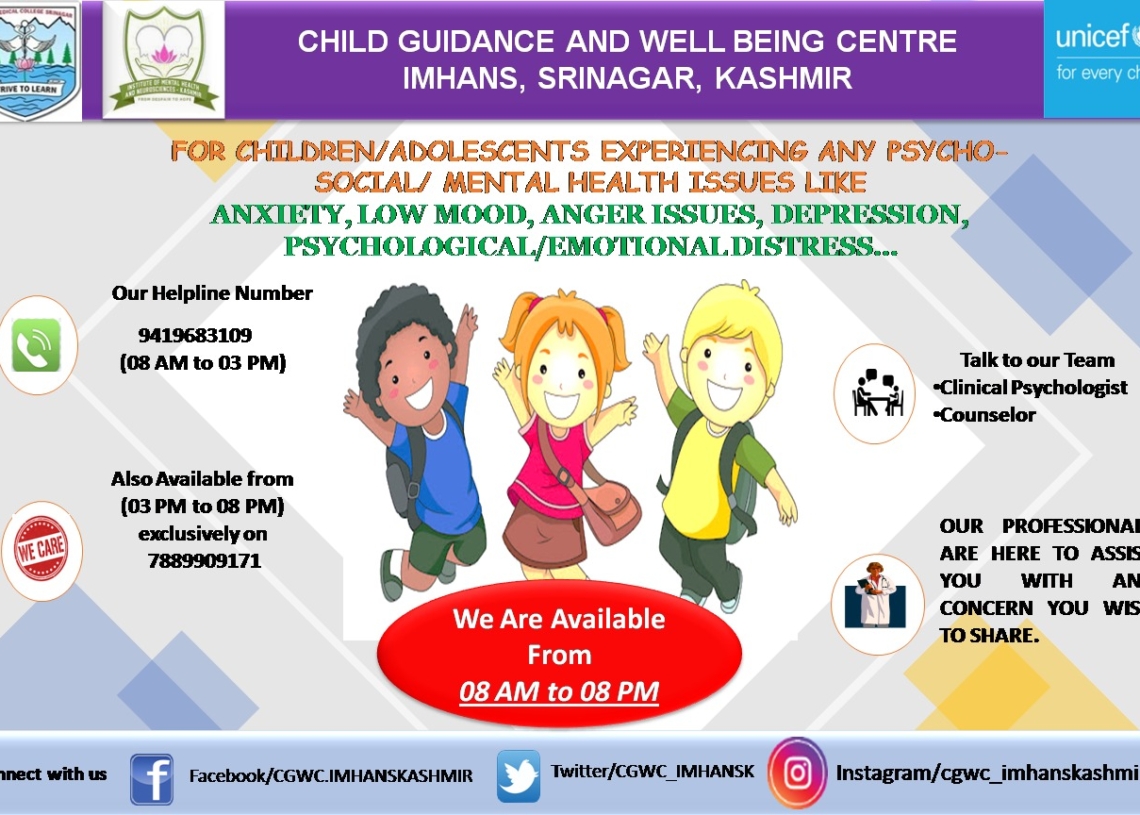 Srinagar: Tired of the distorted voice of his teacher and the drudgery of online classes, eleven-year-old Asif, (name-changed) often switches to YouTube, where he randomly watches the videos for hours together.

Of late, he has been insisting that his parents not push him for online classes as he feels burdened. His changed behavior pattern and aggressive nature have compelled his parents to seek help.

“He was adamant on starting a YouTube channel. Stressed by the online classes, he found his recreation on YouTube. Without any healthy means of interaction and physical classes, he thinks this is how the world works and social media channels are the only reality,” said Touseef Rashid, Psychiatric Social Worker at Child Guidance and Wellbeing Centre, CGWC, IMHANS.

The advent of the pandemic along with the multiple lockdowns and protracted periods of isolation have bewildered children, who can barely make sense of this ‘new normal’ just when they were beginning to open up to the new world. Among other things, the absence of actual physical interactions in schools has made kids irate, impatient, and aggressive in the valley. Online classes and long hours in front of a computer screen have worried parents, especially if they have noticed behavioral setbacks in their kids.

Not only this, a lot of children are struggling to deal with fear, grief, and helplessness during the pandemic period.

Sample this: The memory of his doting father who was kept in quarantine and his enforced separation from him due to Covid-19 last year still haunts 13-year-old Umar (name-changed).

“The toll it took on his mental health was so devastating that he now gets afraid even when his father steps out to the market. He often finds himself recollecting the trauma faced in his father’s absence,” the psychiatrist treating him said.

Dr. Zaid Wani, In-charge, CGWC, said everyone speaks about the mental health problems of adults, but the effect on children is often understated.

“There is hardly any awareness on the need to address those of children. The increased screen time poses a great risk to children. In the garb of online classes, they are using the time in playing games on the internet and social media interactions dominate their moods,” Dr. Zaid said.

He pointed out that several components required for the healthy development of children have been severely impacted in the pandemic.

“Physical activity is almost out of bounds, interactions with friends and new experiences from travel as well as unstructured playtime all have been shelved in the pandemic. This has affected their mood terribly as well as their ability to concentrate and learn during online classes. Poor behavior is frequently the result of a skill deficit in children,” Dr. Zaid said.

“School-age children are facing challenges in academics, and parents have to spend extra time to help them cope. Teenagers are worried about their future – whether exams will be conducted or not, whether their careers will be impacted etc. There is an increase in symptoms of stress, anxiety, and depression being reported in children and adolescents.  If not attended, the child could face emotional health issues in the future and it can also trigger suicidal thoughts,” Shaheen said.

According to the official figures of Child Guidance and Wellbeing Centre, Institute of Mental Health and Neurosciences, Srinagar under the MHPSS Program of UNICEF, 5400 sessions with children have been recorded at the center since last year.

Of late, the center has expedited its efforts to provide mental health aid through various programmes to children affected by the pandemic.

“We are in capacity building and Psychoeducation awareness camps. During this pandemic, we started a new initiative that we call MHPSS on wheels. We used to go to communities’ educating them on psychological issues, sharing Advisories through public address systems,” Syed Mujtaba, Training Coordinator at CGWC, said.

He said, not only this, the center took various special initiatives during the COVID-19 lockdown. “We established helpline numbers 9419683109 (08 am to 03 pm) and 7889909171 (03 pm to 08 pm) to address the concerns of children with mental distress with specific reference to the second wave of the pandemic,” Mujtaba said.