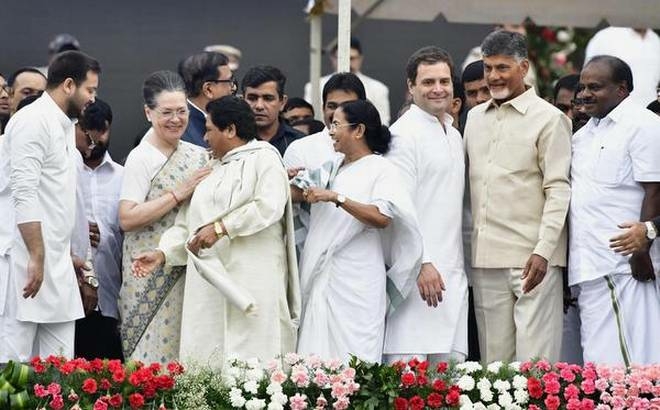 With the Election Commission having announced the schedule for elections to the Legislative Assemblies of Chhattisgarh, Madhya Pradesh, Mizoram, Rajasthan and Telangana in November-December, the stage has been set for a ‘dress rehearsal’ of the elections to the Lok Sabha in 2019.

This dress rehearsal will, in ideological terms, be a straight fight between majoritarian supremacism and democracy, between ideological hegemonism and constitutional federalism. But will it be, in electoral terms, a straight choice for the voter between the the National Democratic Alliance (NDA) and the Opposition’s ‘others’, united or even allied? After the ‘Karnataka moment’ in May, it seemed like this straight choice was as good as ‘done’. But today, with discordances in the non-BJP Opposition’s pre-poll voice, the situation calls for sober reflection.

The voter will see in the dress rehearsal’s optics, on one side the Rashtriya Swayamsevak Sangh-Bharatiya Janata Party’s highly uniformed, prescribed, single dress code: white and khaki. On the other side a riot of federal colours and logos — from the Bahujan Samaj Party’s (BSP’s) blue, to the Samajwadi Party (SP) and the Left’s red, the Congress’s tricolour, the Mizo National Front’s tiger’s deep yellow, the pink of the Janta Congress Chhattisgarh, the pink, again, of Telangana Rashtra Samithi, and the deep green of that State’s All India Majlis-e-Ittehadul Muslimeen.

The cynic can (and should) despair: “The Opposition is divided! Look at how the Karnataka glue is drying up… The Congress is being typical – arrogant — not having the grace to give the BSP and SP a few more seats in Rajasthan and Madhya Pradesh, Chhattisgarh… The Madhya Pradesh voter is confused by so many Congress factions — Kamal Nath who is said to be the CM face, Jyotiraditya Scindia who is said to be the CM brain, Digvijaya Singh who is said to be the CM heart… Between Ashok Gehlot and Sachin Pilot there is a war in Rajasthan no less intense than that between Congress and BJP… This is already giving Vasundhara Raje an upswing. Don’t be surprised if the Princess flukes a comeback.”

None of these observations would be wrong as observations. And it is good that they be made, be heard — for they can and should jolt the Opposition into urgent repair-work. The ‘Karnataka moment’ was what can be called a Westphalian moment.

A reflection on that far back, 1648 occurrence would be in order. Suffice it to say, the Treaties of Westphalia ushered in a balance between states in central Europe which had, until that watershed accord, been dominated by the Holy Roman Empire with the Habsburgs and their Catholic allies on one side and Europe’s Protestant nations and France (Catholic but anti-Habsburg) on the other. The Protestant states of Europe such as the Swedish, Danish and the Dutch fought Rome gallantly for thirty years but the tide turned only when France, though Catholic, joined the war on the Protestants’ side, altering the war’s destiny.

Westphalia has its critics who point to the risks of territoriality stemming from geopolitical autonomy, but it has, nonetheless, become a metaphor, a by-word for smaller entities coming together to resist the might of the physically and militarily large, the technologically and financially preponderant and the politically dominant. Former U.S. Secretary of State Henry Kissinger put it succinctly when he described the Westphalian viewpoint as “checking each other’s ambitions through a general equilibrium of power”.

No analogies are perfect, no metaphors fit like a glove but post-Karnataka India, in 2018, shows unmistakable signs of a Westphalian moment — its fragilities and possibilities, both. The BJP, ruling at the Centre and in a majority of the States, is not unlike the Holy Roman Empire of 1648. And the Congress, the second largest national party, is like France, bigger than ‘the rest’ but capable of giving moral and material support to them and, in a way, leading them to discover, to quote Mr. Kissinger again, “a practical accommodation to reality, not a unique moral insight”.

To offer the Holy Roman Empire of India, 2018, a defining knock-out blow, the Congress needs to discover within itself the France of 1648, convert its sense of bigness into big sharing, big giving, big leading and – big-time self-forgetting, big-time self-restraining. Without Sweden, Denmark and the Dutch in tow, France could not have taken on the Holy Roman Empire and the Habsburgs. Without the regional parties, the Indian National Congress cannot take on the BJP.

If in the State Assembly elections that have just been calendared, the Congress shows a “practical accommodation to reality”, then the possibility of the gesture being reciprocated by the regional parties and by India’s Left, never to be discounted either for its ideological voltage or its numerical increment, in 2019 gets enhanced. And this cannot but lead to “a new equilibrium” and a new impulse to federal and republican nostrums, so rudely staunched by the NDA government. The Congress must take that call.

So, does that mean that the Congress does all the giving and the regional parties all the taking? It cannot, not in Westphalian terminology. Regional parties have to know that the Indian voter has shown a power of discrimination that calibrates choices, voting in a particular way for the State and in another way for the Centre. That highly intelligent voter must be given the choice and the chance to vote simultaneously for federalism within the State and democracy at the Centre. And that choice and chance can be given to the voter only if the Congress and the other Opposition parties come together in a pre-poll alliance.

If they does not have such an alliance and the democratic vote gets splintered, plain arithmetic tells us that the chance of majoritarianism getting the better of democracy will heighten. And even if the Congress ‘here’ and a regional party ‘there’ were to emerge as the single largest party and manage to form a government , that victory will be pyrrhic, for the ‘Holy Roman Empire’ would have prevailed over the scattered states of our ‘Europe’. The NDA, back at the Centre in 2019, will take little time to reduce the regional parties and the Congress to abject, minor entities.

Its Westphalian moment must be seen and grasped by India’s democratic Opposition.

Memory is a great charger. It is also a great inhibiter. The Congress’s memory of its past supremacy energises it but restricts its scope for a practical accommodation of current realities. The Congress’s memory is also, very often, no different from its cadres’ stinging short-term memory of power and its loss. Sharing comes to the recently deprived, with effort. But share it must. If only because if it does not, there may be nothing left to share.

Likewise, the non-Congress Opposition is energised by its memory of trouncing the ‘giant’ Congress in the States, sending it often into third and fourth place. But they cannot forget that 2018 and 2019 are a different theatre altogether. They are not about a choice between democrats within democracy, but a choice in a fragile democracy between those who want to protect it and those who want to usurp it. In optimising numbers every number counts, every seat, every vote — and in doing that, they cannot afford to reckon without the Congress. This opportunity optimisation will be called by the NDA ‘opportunism’. But then we should thank the ‘opportunism’ of those who delivered Europe from the hands of the Holy Roman Empire.

The party is bigger than its leaders, the nation bigger than a party. Never before has this been truer than today when a systematic attempt is being made to use the methods of democracy to morph it into its very antithesis.