In a first, French Vogue features hijab-clad woman on cover 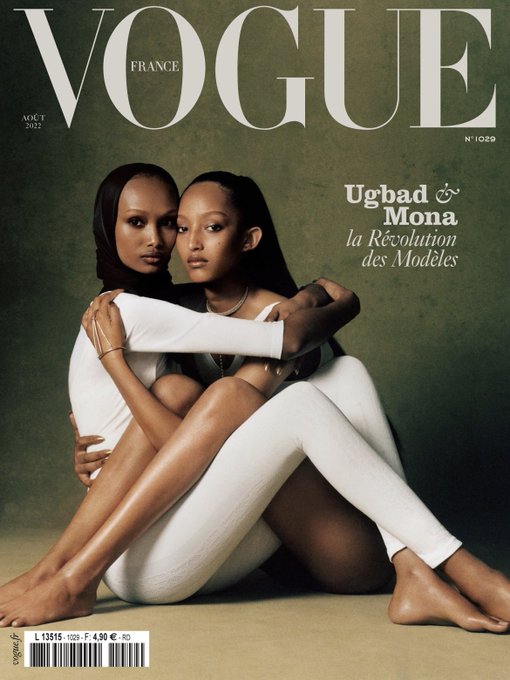 For the first time since 1920, a hijab-wearing woman has made it to the cover of the French edition of Vogue magazine.

Abdi was featured alongside another Somali woman, Mona Tougaard, meaning it was also the first time two Somali women have adorned the cover of the magazine, according to Muslim Girl.

Asked by Vogue what their combined cover means, Ugbad said: “Everyone was aware of the importance of the project, and Mona and I were quite simply happy to be part of it.

“We had never seen two black Somali women on the cover of Vogue. It will go down in history.”

Ugbad said the two women “truly hope” the cover will “allow young people to feel as though they are being seen and represented”.

Vogue France’s decision to feature a hijabi woman came despite the challenges and discrimination hijab-wearing Muslims face in the European country, where around 5.7 million Muslims live.

The headscarf has been banned in French schools since 2004 and the public wearing of full-face veils, such as the niqab, has been forbidden since 2011.

Vogue France came under fire earlier this year after it wrote “Yes to the headscarf!” in the caption of a carousel of images on Instagram that included a photo of model Julia Fox with a scarf covering most of her hair.

The later-deleted sentence caused outrage in a country where Islamophobia has increased in recent years.

Abdi is friends with cover co-star Tougaard, a Danish woman of a Somali, Ethiopian, and Turkish background.

The women are both in their early twenties and said they were “proud” of their Somali heritage.

Tougaard, who was nine when her mother died, said it “reminds me of who I am and who my mother was”.

Ugbad said it’s “very important” to be “proud of your roots”.