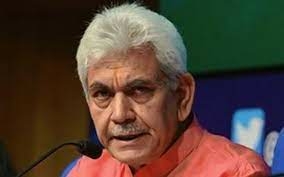 “A magisterial inquiry by officer of ADM rank has been ordered in Hyderpora encounter,” Lieutenant Governor Manoj Sinha said in a tweet .“Govt will take suitable action as soon as report is submitted in a time-bound manner,” he said.

“.JK admin reiterates commitment of protecting lives of innocent civilians & it will ensure there is no injustice,” LG said.

Four persons were killed in Hyderpora encounter on Monday evening. However, families of three slain contested police claim stating that the slain were innocent. Police chief of Kashmir Vijay Kumar admitted that building owner Altaf Ahmed was a civilian who got killed in a cross fire but stated that Dr Mudasir Gul was an OGW while the third one identified as Amir Ahmed.

There has been a massive outcry over the Hyderpora encounter across Kashmir with mainstream leaders including former chief minister’s demanding handing over of bodies of Altaf and Dr Gul back to their families for burial besides demanding an “impartial probe.”