How BJP’s ascendancy stumbled in south 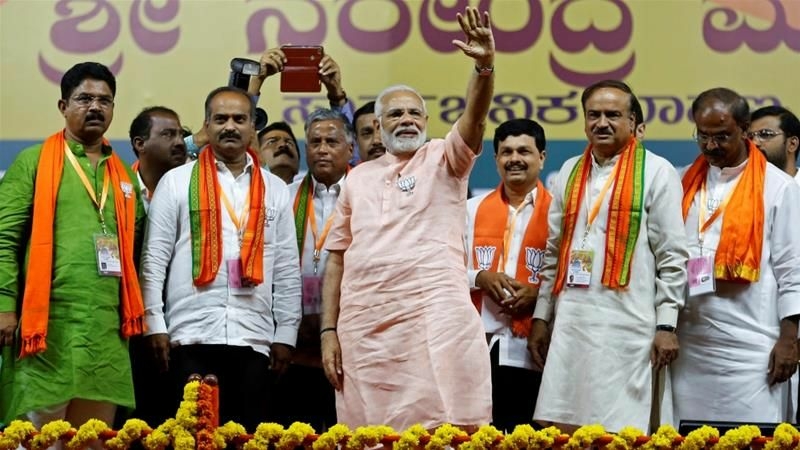 Never has British Prime Minister Harold Wilson’s quip about a week being a long time in politics appeared more apt. A week ago, leaders of India’s ruling party, the Hindu nationalist Bharatiya Janata Party (BJP), fed sweets to one another on live television to celebrate “victory” in India’s southern state of Karnataka.

Seven days later, the smiles on their faces gave way to disappointment as they realised they had celebrated prematurely. Although it came first in the election, the BJP lacked the seats to form a majority government, and after much deliberation and issuing of court rulings, it had to give up its mandate to an alliance of two parties, the Congress and the Janata Dal (Secular) – JD(S).

Despite being bitter rivals in parts of Karnataka, the two parties decided to make common cause with the purpose of preventing the BJP’s charge. Both parties accuse Indian prime minister and BJP leader Narendra Modi of being a deeply divisive leader and pursuing a majoritarian programme.

The BJP’s failed bid for power is an inopportune embarrassment for Modi as it halts his declared ambition to rid India of the Congress party. In a campaign meeting in Karnataka, Modi had announced that the Congress would be reduced to being a PPP rump – Punjab, Puducherry (a tiny centrally administered territory with token legislature) and Parivar (Hindi word for family, an allusion to Rahul Gandhi being a dynast) and this has not happened.

Last December the BJP barely succeeded in retaining power in Gujarat, Modi’s home state. Subsequently, the BJP lost a couple of crucial by-elections. For the first time since it assumed office, the BJP no longer has a comfortable majority in parliament.

In contrast, the Congress not only retained power in Karnataka, albeit with a regional ally, but the BJP’s unscrupulous shot at government formation also triggered the process of an anti-BJP front coalescing. The BJP’s failure has been welcomed by several opposition leaders, including West Bengal chief minister, Mamata Banerjee, as a victory for democracy.

Although this will not immediately lead to opposition leaders forming an anti-BJP alliance to take on the BJP in the parliamentary polls due next year, the Congress and JD(S) have created a model for a possible realignment of political parties in the future. The Congress has clearly shown its willingness to play second-fiddle when it comes to keeping the BJP out. How it approaches states where it is an adversary of another anti-BJP party will hold the key to a joint front.

The BJP’s miscalculation will immediately have a negative impact on the party’s bid to retain power in three crucial states – Madhya Pradesh, Rajasthan and Chhattisgarh – where state polls are due later this year and where the BJP faces a bipolar contest with the Congress party.

The states are part of the northern heartland where India’s dominant language, Hindi, is spoken and are currently governed by the BJP. The three states elect 65 members of the Lok Sabha (the lower house of the Indian parliament), and in 2014 the BJP won 62 of these seats. Altogether the BJP and Congress are locked in direct contests in almost one-third of the total parliamentary seats.

Additionally, there are more than a hundred seats to be contested in other states where the Congress has stable long-term allies and poses a significant challenge to the BJP. Events in Karnataka can stir the Congress cadre in all these states out of the despondency they slipped into after BJP’s 2014 winning streak.

Much of the negotiations among opposition parties will depend on the outcome of these three states, and Congress leader Rahul Gandhi’s chances of emerging as a challenger to Modi would be factored by his party’s performance there.

The BJP has consciously been attempting to convert elections into a presidential-style campaign because Modi so far beats rivals on personal popularity. The challenge for opposition parties in 2019 will be to ensure that people form their electoral choice on the basis of local issues and not on the basis of an overarching idea presented by Modi.

In 2014, the BJP built its campaign by running down the Congress-led government, by highlighting a plethora of corruption charges and by making a litany of promises, ubiquitously referred as acchhe din or “good times”. There is an undisputed shortfall in achievements and delivering on this front.

While the opposition would attempt to highlight these, reminding people promised jobs have not come their way, and that other deficits remain as high as they were, the BJP will seek votes by claiming that it still is a work in the making and that since 2014, the party has taken measures against corruption and ensured no major charges of misappropriation have been levelled against the government. The BJP is sure to mount a multi-layered campaign in which Hindutva or Hindu nationalism will be a significantly highlighted.

Till the autumn of last year, there was an air of certainty over Modi securing another term in office. But the growing rural crisis and continuing uncertainties over employment, coupled with increasing social alienation of India’s religious minorities and the Dalits due to identity-based attacks have altered perceptions considerably.

Consequently, a keener battle now appears to be awaiting the BJP.

The events in Karnataka have provided the opposition with belief in its capacity to beat the BJP at its own game. They, however, will err if complacency is allowed to set in due to this “victory” in the southern state.

There also is no denying that under the BJP government, support for the majoritarian idea has grown. The slightest mention of the need to be “fair” towards religious minorities, mainly Muslims, raises prospects of “reverse polarisation” in BJP’s favour. There is also a greater acceptance of autocracy under the garb of democracy.

It will be much harder to dislodge the BJP from power than the relative ease with which the party has been kept out of office in Karnataka. But the electoral contestation that had evaporated in Indian politics has made a grand comeback.