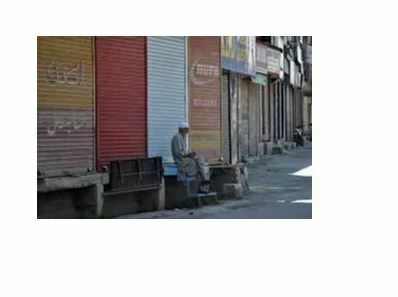 Oh god! That’s my reaction every day when I get up! Hartal. For some it’s a relief, for some it is a form of only resistance and for people like me it is a day of frustration. HARTAL! A form of struggle chosen by us!Perhaps reluctantly. Undoubtedly Kashmiris have been tangled like puppets throughout the history, however the question is who has taken us here and who will get us out of this nightmare. Indeed it is we Kashmiris ourselves.

Problem and Root cause: Division of the state the of Jammu and Kashmir

In my leaders’ eyes solution is that we have to hartal everyday so that 1. 4 billion people in India and Pakistan realize our suffering and we give an impression to the international community that we are under subjugation.

When British divided J&K, world already knew that a business venture has been floated. Well, every problem heeds to an opportunity. How do we expect that the West will stop its factories and make their populace unemployed of the fact that there is no rivalry between India and Pakistan?

I would first emphasise on reform rather than solution. Kashmiris need reform my leadership, reform on social, economic and political grounds. We are just around 7 million indigenous Kashmiris. How do we expect solution when we can’t even collect a single word of mouth? Even twins in Kashmir have two political opinions.

What reform means is a different topic altogether. Let’s put forward an alternative to the hartal. The simple solution is that we have to accept the polity under the prevailing law. We need to build stronger Kashmiri nationalist sentiment irrespective of the religion. We need to determine laws for ourselves and we have to be reformed. This is a long term process and will take time. For that, we also need to recall our displaced community as well.

Erstwhile Jammu & Kashmir had five provinces (Jammu, Kashmir, Ladakh, Gilgit-Baltistan and Azad Kashmir) among which only Kashmir has a problem, rest of four have determined their nationality with whatsoever avenues they have.

Real hartal would have been to build a parallel polity whereby your set rules are obeyed by the people. In simple language can you persuade a person to record land transfer beneath your umbrella like old time Agas used to do. I doubt that! Can you persuade Kashmiris not to abide by the revenue laws of India, I again doubt that!
What does hartal do rather than snatching livelihood of poor? In any way hartal does not impact the rich. Kashmir is a dependent economy hence hartal makes no sense to anybody as far as economics is concerned. We are dependent for every taka from outside.

Our natural roadways have been blocked, how can we prosper! After 60 years India has thought of building highway for we people! for we people! I again doubt that.

But, perhaps we will use it. Same is the case with train. You could have fetched a roadmap to people whereby steps for absolute freedom are described, where instead you want to bloat after a single meal.

We could have demanded the reopening of the Srinagar- Muzffarabad highway as a free platform. That could have been an economic milestone for Kashmiris. Perhaps, a vent for free air to flow from the west.

Instead of delivering political sermons you are using mosques to deliver your word to masses. Why to confuse them, when people indeed know that Kashmir is political problem not a religious one.

My leadership my young brothers are dying. There reasons are misguided and they have been compelled to raise arms, perhaps Army takes pleasure by killing an amateur arsenal holder and they are awarded for that on 26 January every year. They don’t have anywhere else to click their triggers. Whoever dies it’s the human after all.

Burhan Wani, Lt. Omar Fayaz, Dr. Muneeb Wani are the facets of our society. These multiple facets need to be addressed on the same page.

Our solution lies in politics, like every countries does. People in Kashmir understand the need for administration and they also understand the sanctity of their sentiment. Kashmir’s culture of secular brotherhood should be the spine of our reforms. Our resources are depleting and we are letting it happen. A layman will rebut “ye chay India hichchaal” “Indian conspiracy”.

It is We who polluted Dal, Wular, We looted forests, We turned wetlands into colonies, We litter on roads, We honk like nomads, We bribe, etc. are we really determined for nationhood? I would rather determine my responsibility as a Kashmiri first rather than catching salmon in the salt. It is our responsibility to bring reform first, enlighten ourselves and pave a way for better future.

My outburst is an emotional one perhaps fundamental as well.