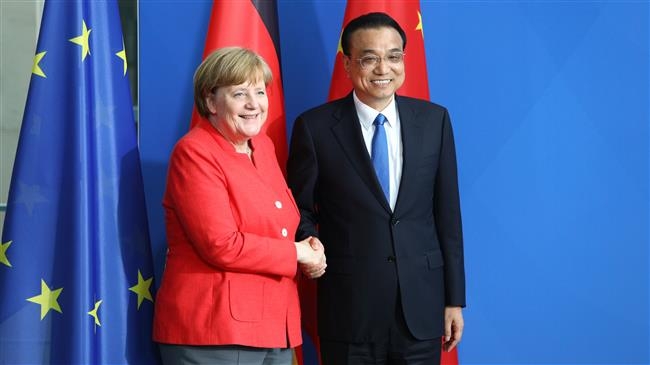 Tehran :Germany and China have reiterated that they are committed to the 2015 nuclear deal between Iran and the P5+1 group of countries following the United States’ withdrawal.
Speaking alongside visiting China’s Premier Li Keqiang , Chancellor Angela Merkel said the nuclear accord, officially known as the Joint Comprehensive Plan of Action (JCPOA), was well-negotiated. The Chinese premier also warned against the unforeseeable consequences if the deal falls apart.
“We remain committed to the nuclear agreement. We think it was well negotiated,” Merkel said. “There is more that needs to be negotiated with Iran, but we think it is better to stay in the agreement.”
However, Merkel implied that Berlin could do little to protect international companies against punitive US measures, adding that it is up to individual firms to decide if they want to invest in Iran.
Earlier in the day, a spokeswoman for the Chinese Ministry of Foreign Affairs, Hua Chunying, expressed Beijing’s resolve to continue efforts to safeguard the achievements of a 2015 nuclear agreement, putting forward a five-point proposal.
“Facing the complicated and stern situation at present, China clearly put up a five-point proposal emphasizing in particular that international rules should be observed, major countries should show their due integrity and sense of responsibility, unilateral sanctions can only run counter to one’s desire and should be abandoned, and dialogs and consultations should adhered to a constructive approach in discussions about issues of common concerns,” Hua said.