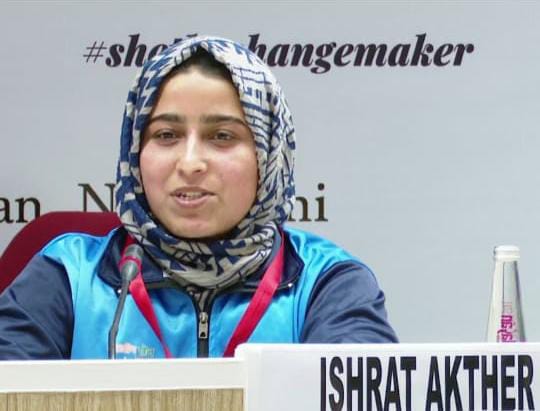 Srinagar: Ishrat Akhter was left wheelchair-bound after a fall from the balcony of her house in North Kashmir’s Baramulla district. However, she did not let her disability come her way to live her dreams.

She is now an award-winning international wheelchair basketball player and a motivational speaker, who inspires scores of youth especially the ones with physical disabilities.

“I was a very normal village girl until I had a fall from the balcony of my house, by accident, on August 24, 2016. The accident that broke my spinal cord left me physically challenged and handicapped. After that accident, I was treated at the Voluntary Medicare Society where I joined the Wheelchair Basketball team and got selected to play the nationals in Tamil Nadu, representing Delhi, and later went on to become J&K’s first international wheelchair basket player,” she said.

As Jammu and Kashmir did not have a team of their own then, Ishrat decided to gather one.

“J&K did not have a team at that time. I then got in touch with some good players and managed to form a team for J&K. Then, I played the second national at Mohali while representing J&K. There, I was selected to represent India at the Asia Oceania Wheelchair Basketball Championship at Pattaya Thailand in 2019 International level,” she said.

“Besides that, I participated in a boys’ wheelchair race. Being the only girl in that race, I secured the first position in that event. I also play Wheelchair Table Tennis. As a motivational speaker now, I have delivered many talks in Kashmir and outside J&K,” she added.

Ishrat has also received several awards for her accomplishments. “I have received several awards and I was also presented the Kashmir Young Leadership Award 2021 by Lieutenant Governor Manoj Sinha. I was then presented the Kashmir Young Achievers Award, 2021 by Major General Prashant Srivastava, GOC Victor Force, on behalf of the Governor,” she said.