`Fait Accompli: Writer of `How to Murder Your Husband’ convicted for fatally shooting her spouse in real-life 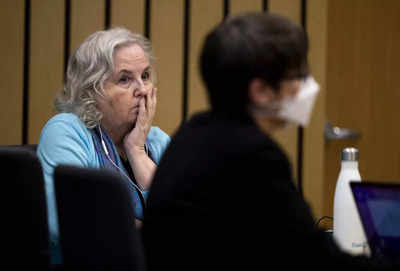 After almost 24 hours, the jury came to the decision and gave the verdict per which the novelist was found guilty of second-degree murder.

Daniel, who was a chef by profession, was shot twice in the back and both the bullets pierced his heart killing him instantly.

Daniel’s body was discovered by his students and co-workers at the Oregon Culinary Institute.

The body was found in one of the kitchens at the institute. Crampton Brophy showed no visible reaction to the verdict. One of her lawyers, Lisa Maxfield, said that the defence team would appeal against the decision.

The opening of her Essay read, “As a romantic suspense writer, I spend a lot of time thinking about murder and, consequently, about police procedure. After all, if the murder is supposed to set me free, I certainly don’t want to spend any time in jail. And let me say clearly for the record, I don’t like jumpsuits and orange isn’t my color.”

It further went on to detail motives – financial, “lying, cheating bastard.” Knives have been deemed as “personal and close up. Blood everywhere.” Poison, on the other hand, is “considered a woman’s weapon,” and was too easy to trace, she wrote. Guns were “loud, messy, require some skill”.

The police levied charges on Nancy after a Toyota minivan, similar to Nancy’s, was found near the murder site, before and after the shots were fired. During the investigation, the police also discovered a Glock pistol that she and her late husband bought at a gun show. However, to the police’s surprise, the pistol was never used.

Investigators also found that Nancy had made purchases from a ghost gun website and had also bought a Glock slide and barrel from eBay. The investigators allege that Nancy bought the kit, replaced it with the original, shot Daniel, and then replaced the original back so that the shelling couldn’t be traced back to the gun the couple owned.

Nancy, in the past, had released two self-published novels titled, ‘The Wrong Husband’ and ‘Hell On A Heart,’ both of which were financial failures. In 2011, she wrote a blog essay titled, ‘How To Murder Your Husband,’ where she admitted to having a deep understanding of police procedures and having thought of murders multiple times.