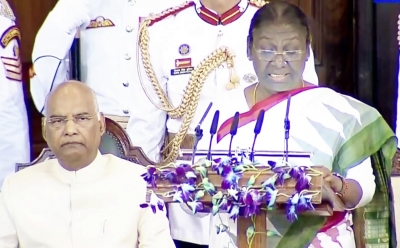 Chief Justice of India N.V. Ramana administered the oath of office to Murmu in the Central Hall of Parliament.

Outgoing President Ram Nath Kovind and Murmu arrived in Parliament in a ceremonial procession shortly before the swearing in commenced.

She is scheduled to deliver an address later.

Before leaving for the swearing-in ceremony, Murmu reached the Rashtrapati Bhavan, her home and office for the next five years, where she was welcomed by Kovind and his wife Savita.

The outgoing President had then escorted Murmu to the Presidential study for a brief meeting.

Earlier in the morning, Murmu paid tributes to the father of nation Mahatma Gandhi at Rajghat.