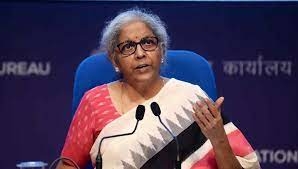 New Delhi: Union Finance Minister Nirmala Sitharaman on Tuesday said that the GST Council should not be politicised as it is a body in which every finance minister from every state sits in and decides on how the disbursements happen.
While intervening during the question hour in the Rajya Sabha on the issue of GST compensation which is yet to be paid to the states, the Finance Minister said: “I appeal through you, that we don’t need to politicise this. Its an insult to the GST council.”
NCP lawmaker Vandana Chavan during the ‘Question Hour’ had cited inadequate release of funds to the state of Maharashtra, saying that the situation was similar in certain non-BJP states during her supplementary question on the GST related issue.
Responding to her question, the Finance Minister said: “The council is a body which decides on how the disbursements happen…It is very well to point out that Maharashtra has a very big amount due, but in distribution as well, the share of Maharashtra has been fairly higher compared to other states.”
BJP Member Y.S. Chowdary also asked a question on GST compensation yet to be paid to the states, at which Minister of State for Finance Pankaj Chaudhary informed the House about status of pendency with respect to Andhra Pradesh and Telangana.
While responding to a question on the setting up of Siddha Medical Research Centre at Kollimalai hills in Tamil Nadu, Minister for Ayush Sarbananda Sonowal said: Considering the availability of the medicinal plants there, I would definitely visit the place and a decision will be taken after that.”