Djokovic barrels into Shanghai third round 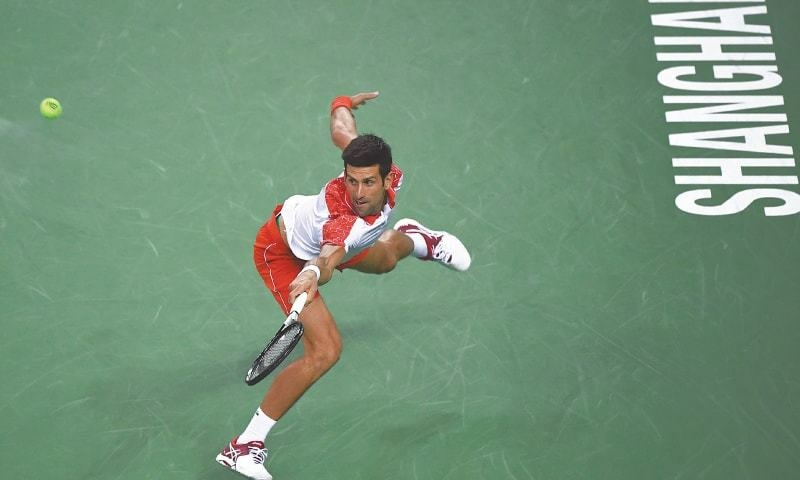 SHANGHAI: Novak Djokovic, the hottest player on the men’s tour in the second half of the year, stepped up his bid to dethrone Rafael Nadal from the top of the world rankings with a 6-3, 7-5 win over Frenchman Jeremy Chardy in the second round of the Shanghai Masters.
The 31-year-old Serb was playing his first match on the ATP tour since lifting his 14th Grand Slam title at the US Open last month and looked in complete control as he won 34 of 40 points on his first-serve to book a place in the last 16.
Djokovic, who received a first-round bye, could pass Roger Federer at number two in world rankings if he reaches Sunday’s final. Nadal’s lead at the top will be trimmed as he is skipping the Asian swing to recover from a knee injury.
The Serb’s victory improved his perfect record against the 41st-ranked Chardy to 12-0 in matches played, and 28-0 in sets won, and will play either Italy’s Marco Cecchinato or South Korea’s Chung Hyeon next.
Fifth-seeded Marin Cilic became the highest seed toppled in Shanghai when 48th-ranked Nicolas Jarry of Chile rebounded for a 2-6, 7-6 (8-6), 7-5 second-round win.
Cilic served for the match at 5-4 in the third set but couldn’t. Jarry won the next two games to advance to the third round.
World number seven Dominic Thiem’s bid to qualify for the next month’s ATP World Tour Finals suffered a blow as the sixth seed was edged out 6-4, 6-7 (8-10), 7-6 (7-4) by Australian Matthew Ebden.
Thiem, who also received a first-round bye, struggled to find his rhythm in a tightly contested encounter which lasted two hours and 45 minutes.
A couple of champions from last weekend also progressed.
Nikoloz Basilashvili, who downed Juan Martin del Potro for the China Open title on Sunday, won his sixth straight match after beating Canadian Denis Shapovalov 6-2, 6-2 in just under an hour to open his Shanghai account.
Up to a career-high ranking of 23, Basilashvili never faced a break point on his serve. The 26-year-old Georgian earned his first win in Shanghai after qualifying in 2015 and 2017 and will meet fourth-seeded German Alexander Zverev in the second round.
Daniil Medvedev, who upset Kei Nishikori to win the Japan Open on Sunday, struggled but beat Chinese wild card Zhang Ze 3-6, 7-6 (8-6), 6-4.
Briton Kyle Edmund, who moved to a career-high ranking of 14 this week, continued his impressive run in Asia with a 7-5, 6-3 win over Serbia’s Filip Krajinovic. Also, French qualifier Benoit Paire upset 15th-seeded Pablo Carreno Busta 6-3, 6-4.