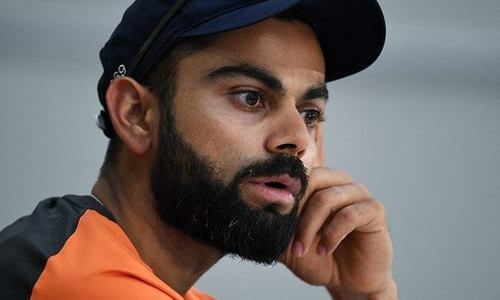 Mumbai: Indian captain Virat Kohli faced stiff criticism both Down Under and at home after his side’s crushing loss to Australia in the second Test.

Former India great Sunil Gavaskar meanwhile hit out at “selection blunders” and the Indian Express daily slammed Kohli’s “explicit lack of confidence” in some of his players.

Kohli and Paine exchanged barbs, at one point prompting intervention from the umpire, during the game that Australia won by 146 runs to level the four-match series 1-1.

It was reported that Kohli belittled Paine as just “a stand-in captain” — a claim angrily denied by India’s team management.

“At the end of the match, you should be able to look each other in the eyes, shake hands and say ‘great contest’,” he wrote in a column for Fox Sports. “Virat Kohli could not do that with Tim Paine, shaking the Australian captain’s hand but barely making eye contact with him. To me, that is disrespectful.

“Kohli gets away with more than most cricketers simply because he is Virat Kohli and he gets placed on a pedestal but this Test left the Indian captain looking silly,” he added.

After the game both Paine and Kohli played down their on-field sledging, which was picked up by stump microphones.

Kohli described it as simply banter that was part and parcel of Test cricket.

“As long as there is no swearing the line doesn’t get crossed. And no personal attacks,” he said.

He added that the remarks in Perth were nothing compared to their Australian tour in 2014, when he claimed to have been called a “spoilt brat”.

But Johnson said Kohli’s behaviour made a mockery of his pre-series claims that he was a changed man and didn’t plan to initiate any confrontations.

“What we saw this Test says otherwise,” he said. “From my experiences with him and what I am seeing as an observer now, not much has changed. It was disappointing and that is not the only area where he let himself down.”

Johnson and Kohli have history. In 2014 at Melbourne, Johnson threw the ball that hit Kohli in the back when attempting a run out, sparking a heated debate.

Gavaskar said that the roles of Kohli and coach Ravi Shastri need to be assessed if India fail to perform in the final two Tests in Melbourne and Sydney.

He said that since India’s tour of South Africa at the start of the year, picking the wrong players “has lost matches which could’ve been won.”

If India fail to win the next two matches, “the selectors need to think whether we are getting any benefit from this lot — the captain, coach and support staff,”

The Indian Express said that the biggest bone of contention in Perth was not selection but that Kohli “has little confidence in some of his teammates”.

“It’s a viciously self-fulfilling prophecy: the more you think they can’t do it, they won’t be able to do it,” the paper said.

It cited the non-selection of Ravindra Jadeja, and Kohli saying that fellow spinner Ravichandran Ashwin would probably not have played even if he had been fit.

“Kohli quite rightly rates (Australian spinner Nathan) Lyon highly, but one wonders how Ashwin and Jadeja would feel about their captain’s assessment of them,” the paper added.

“India can still win this series, but for that to happen, Kohli will have to back his players. “